Seferis on Hellenism’s unfinished task; and more from The Free Besieged 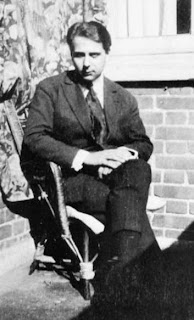 'Greece lives, to the extent that she is able to give birth to great poets… I believe that if she has not managed to provide suitable soil for the tree that [once] burgeoned upon her land… in years to come she will be able not only to give birth, but also to suckle and to nurture the Poet, the Messiah, who will seize [back] from the hands of the barbarians the beauty, the gold-flaming torch, they have stolen from us.' (Giorgios Seferis)

Giorgios Seferis, along with Ion Dragoumis, is the greatest theorist of Hellenism in the 20th century and above is the conclusion of a lecture Seferis gave in Paris in March 1921, when he was just 21, on the Franco-Greek poet Jean Moreas (Ioannis Papadiamantopoulos). There's a lot to consider here; but just a couple of points: Seferis' optimism is surely based on the new Greek civilisation he hoped would emerge following the liberation of Asia Minor, an enterprise that failed and left Greece at the mercy of all sorts of barbarians, where, nearly 100 years later, it still remains. ‘Seizing back from the hands of the barbarians the beauty, the gold-flaming torch, they have stolen from us’ is Hellenism’s unfinished task.

■ Also, in my post for 25 March on Yiannis Markopoulos' musical interpretation of Dionysios Solomos' The Free Besieged; I omitted to make available the most beautiful and moving song on the album: Στα μάτια και στο πρόσωπο/In their eyes and on their face, sung by Nikos Xylouris. I've now put the song in Radio Akritas, and below are the lyrics.

In their eyes and on their face
In their eyes and on their face their thoughts are showing;
A host of major things they learn from the depths of their souls.
Their guts are violently stirred by love and desire for good;
Their guts and the sea alone are never still;
Sweet and free the soul as if it had broken loose,
And they raised with a smile their exhausted visage.
Posted by John K. at Wednesday, March 28, 2018