With swords to cut their path, and in freedom to stay 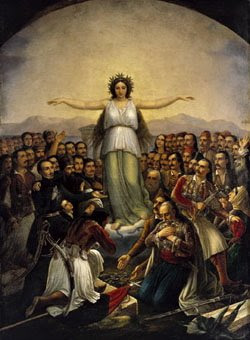 
‘The events that formed the starting point of [Dionysios Solomos’] The Free Besieged were the protracted siege and capture of Missolonghi by a Turkish army, later joined by Egyptian reinforcements. Missolonghi had been a centre of the Greek insurrection from the beginning of the war of independence… and had already successfully withstood an earlier Turkish siege in 1822 – an event that Solomos had already celebrated in his Hymn to Liberty in 1823. The second siege lasted from April 1825 to April 1826. When all food supplies had run out and there was no hope of relief, the besieged Greeks decided that some of the menfolk of fighting age should burst out of the gates and attempt to lead the women and children to safety… while the rest would remain to defend the town to the death. Realising that freedom could not be attained in life, they opted for freedom in death; like Kazantzakis’ hero Kapetan Michalis in his novel Freedom and Death, the besieged of Missolonghi abandoned the watchword of the Greek War of Independence, namely Freedom or Death, opting instead for Freedom and Death.’ (Mackridge, Peter: Introduction to The Free Besieged and Other Poems).


Absolute silence of the tomb
Absolute silence of the tomb prevails on the plain;
Singing bird plucks a seed, and the mother envies it.
Hunger has darkened their eyes, on them the mother swears.
The brave Soulioti stands to one side and weeps:
‘Poor sombre rifle, why do I have you in my hand?
How burdensome you’ve become and the infidel knows it.’

Mother, magnanimous
Upon these ashes they conjure you…
The word, the work, the meaning…

Mother, magnanimous both in suffering and in glory,
Even if in the secret mystery your children ever live
In contemplation and in vision, how privileged my eyes,
These eyes of mine, to glimpse you in the deserted forest,
Which all of a sudden enveloped your immortal feet
(Look) with leaves of the Resurrection, with leaves of the Palm!
The divine footfall of yours I did not hear, I did not see,
Serene as the sky with all the fair attributes it has,
Of which so many sides are revealed and so many hidden;
But, Goddess, I cannot hear your voice,
And am I to offer it straight away to the Hellenic World?
Glory be to its black stone and to its dry grass too.

Exodus: with swords to cut their path
And I see in the distance the children and the brave women
About the flame they have lit and have painfully fuelled
With well-loved articles and modest marriage-beds,
Not moving, not lamenting, not even shedding a tear;
And a spark touches their hair and their worn-clothes;
Come quickly, ashes, so they can fill their hands.

They are ready in the relentless flood of weapons
With swords to cut their path, and in freedom to stay,
On that side with the comrades, on this with death.

Like the sun that suddenly cuts through dense and sombre clouds,
It strikes the mountains on its slopes and there! houses in the verdure.

And from where the sun rises
To where it goes down,

I did not set eyes on a place more glorious than this small threshing-floor.
Posted by John K. at Sunday, March 25, 2018