The Angels of Cyprus, by Nikos Kazantzakis 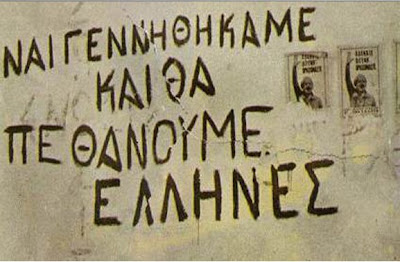 'Remember that the British fought in Cyprus, and seemingly had everything in their favor. It is an island half the size of New Jersey. The Royal Navy, which can be trusted to do its job, sealed off the island from the outside. There were 40,000 British troops on Cyprus under Field Marshal Sir John Harding, and his opponent, Colonel George Grivas, had 300 Greeks in the EOKA. The ratio between regular troops and guerrillas was 110-to-1 in favor of the British! After five years the British preferred to come to terms with the rebels.' (Bernard B. Fall)

EOKA (Εθνική Οργάνωσις Κυπρίων Αγωνιστών, National Organisation of Cypriot Fighters), under the leadership of Giorgos Grivas-Digenis, began its struggle to liberate Cyprus from British colonial rule and unite the island with Greece with a series of bomb attacks targeting government installations on 1 April 1955. Cypriots had been agitating for liberation and union with Greece since the Greek Enlightenment and the campaign came to a head after the Second World War, with anachronistic colonial empires collapsing and subject peoples winning their right to self-determination. The British responded to Cypriots' peaceful agitation for enosis with repression and in July 1954, the British government declared that Cyprus was too important to Britain's strategic interests and would 'never' be allowed self-determination. It is in this context of British cynicism and duplicity that EOKA was formed and in which Nikos Kazantzakis wrote in Nea Estia on 25 September, 1955, the following attack on Britain's Cyprus policy.

The Angels of Cyprus (The fate and honour of an empire)
These very days, a great people are crossing the Bridge of Trika. [The site of a heroic battle in the Greek War of Independence]. It is not only Cyprus' fate that is being judged. It is not the fate of Cyprus alone that is at stake. For the just rock is sure to devour the unjust mountain. What is at stake, what is being judged at the present moment is the fate and honour of a whole empire! The nation that had risen with such national pride and moral exaltation, as one man, to save the honour of the world in those critical hours of the war, is now undergoing one of the fatal apocalyptic trials that will reveal whether its value is genuine or counterfeit.

And at a still deeper, broader level, the fate and honour of the entire Western world is being judged. Always until now, it has boasted that it was fighting for the justice and freedom of other nations. But now we will see whether that world is worthy of using these sacred words, whether the soul of any honourable man at the present time can have confidence in world leaders such as these…

In a major island, 400,000 spirits are raising a hue and cry, demanding their liberty. And the thrice-noble nation where liberty and light were born is raising a hue and cry along with them. From the four corners of the earth (and even from English throats) voices of anger and protest are exploding. By now it is no longer possible for violence and injustice to stifle a whole people in secret, without protest. Apparently, this world we thought had gone rotten, still has spirits that dare to rear their head against hypocrisy, injustice, arrogance.

It is a critical moment. The moral salvation of the whole world depends on the answer given to the Cyprus question. And on this moral salvation, the political, social, cultural salvation of the world has always depended. Cyprus is no longer a detail now, a mere island at the extreme tip of the Mediterranean. It is becoming the fate-marked centre, where the moral value of contemporary man is at stake.

How is the British Empire facing this tragic moment where its own value is on trial? Alas! With means unworthy of a great nation; with unmanly silence at first; and then with deceit, sycophantism, violence. Shame has hidden its face, far off from the disgraced quarters of the Foreign Office.

The genuine people, though, are not despairing. They know that in this dishonourable, inconsistent world, certain fundamental principles still live and reign, daughters of man, whom he has created with his own sweat, blood, tears. And these are the immortal ones. Most of them were born in Greece: freedom, human dignity, the thirst for justice.

Great mysterious forces are multiplying and bearing fruit even while they are being pursued. Hear the words of an age-old myth: An angel came down to earth, and the ruler of the world was enraged on seeing it. And he lunged at it with his sword and split it in two. And at once the angel became two. And again, the ruler of the world lunged at them and split these two angels in two. And the two angels became four, and the four eight, and the eight sixteen, and soon the earth was filled with angels.

Who was this angel? The angel of freedom? Cyprus will soon be full of angels. And the ruler of the world will be crushed, disgraced in Tartarus, his sword shattered.

There is some mystic law in this world (for if there were not, this world would have been destroyed thousands of years ago), a harsh, inviolable law: in the beginning, evil always triumphs, and in the end it is always vanquished. Apparently, for man to buy this privilege, much effort, much sweat, many tears are imperative. And freedom is the most expensive good that can be bought. It is never given for nothing, either by human beings or by the gods. It goes from land to land, where it is summoned, from heart to heart, unsleeping, unsubduable, uncompromising. At the moment we can watch it traversing the soil of Cyprus with steady momentum. And soon its limbs will be spattered with blood. For this is the way freedom always forges its path.

For us this is a good moment to forget our passions and petty cares; for each man of us with his own God-given gifts to follow the path of freedom throughout the land of Cyprus. And we must share her grief, her upsurge, her danger, insofar as we are capable, and surely later on (for this is the law, we said) her great joy as well.

I myself represent nothing. I am not anything. Only a clear conscience. But a clear conscience weighs more in the scale of God and time than an empire. And now that Cyprus has been saved from the waves and is crying out, all clear consciences – from all the quarters of the world; wherever they may be – can hear this cry and see the injustice and cast the stone (the curse) against the ruler of the world, the wrongdoer. The ruler laughs and acts in a cynical manner. He has the power on his side, soldiers, fleets, lethal birds of the air, vast wealth and traitors – and great hubris. He laughs and acts in a cynical manner, but one day (such has always been the omnipotence of man when wronged) – one day, Clear Conscience will hurl this stone at it and it will hang around the neck of the empire and sink it. The great empires have always sunk.

Several years I went back to Cyprus, enchanted by her Greek light and pleasant air. An old man emerged from a peasant home near Famagusta. We picked up a conversation. He was discussing (what else?) the union, and his eyes flashed. And suddenly a broad smile flooded his sunburned face. He put his hand over his heart, and he said, slowly as though confiding some great secret to me:

'The foundation stones of England are shaking! They are shaking, because the human heart has stirred.'