Britain in the Mediterranean: On Robert Holland’s Blue Water Empire 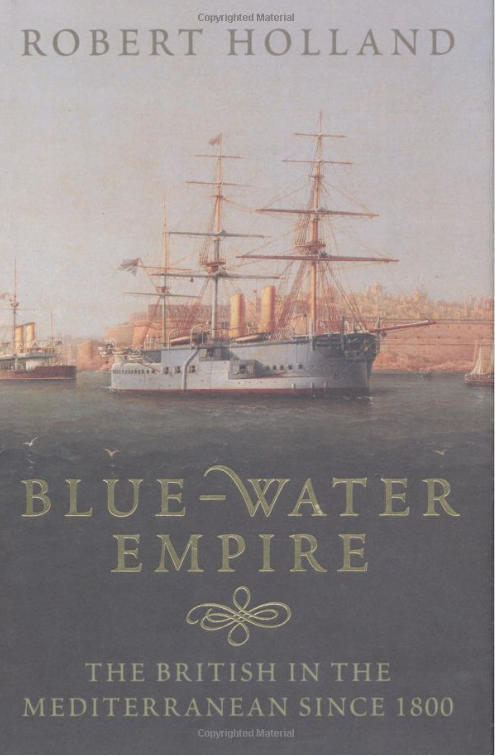 A quick review of Robert Holland’s Blue-Water Empire: The British in the Mediterranean since 1800.

The narrative is compelling and heavily features the fortunes of Greece and Greeks – whether it’s Britain seeking to limit the Greek Revolution of 1821; occupying the Ionian islands and Cyprus; protecting the Ottoman empire in decline; promoting Greece as the rising power in the Eastern Mediterranean after World War One; affecting to shape Greek politics after World War Two; or contributing, wittingly and unwittingly, to the re-emergence of Turkey as a regional force and the diminution of Hellenism in Constantinople and Cyprus.

Holland’s book is, however, marred by the absence of a critical paradigm or depth and Holland’s somewhat patronising tone, manifesting itself in a lack of empathy and even a belittling of those enthral to the British empire, the impact of which Holland portrays as being mostly benign, if not beneficial. Thus, he attributes, for example, the rapid socio-economic advancement Cyprus experienced post-independence not to the Cypriots themselves but to the British legacy and its supposed predisposition to the rule of law and good governance. (In fact, the legacy of British rule in Cyprus was poverty, under-development, mass emigration and, ultimately, devastating partition).

Another striking point that emerges from Holland’s book relates to the abject failure of the British imperial project and colonial culture to win over Greeks in the Ionian islands (which endured British rule from 1815-1864) and Cyprus, where Britain governed from 1878-1960. By contrast, the Maltese and Gibraltarians were much more receptive to British colonialism and, indeed, Malta and Gibraltar provide ominous examples of what Cyprus and the Ionian islands could have become if the Greeks there hadn’t steadfastly and from the outset resisted British rule and attempts to de-Hellenise or Anglicise them.

Finally, Holland’s book allows us to note how – especially in comparison to, say, the Byzantine or Ottoman imperiums – Britain’s empire spectacularly and precipitately declined, disintegrating by the early 1960s, barely 40 years after having reached its apogee.
Posted by John K. at Tuesday, August 28, 2018