Insult, wrath and retribution in the Peloponnesian war: yet more thoughts on JE Lendon’s Song of Wrath 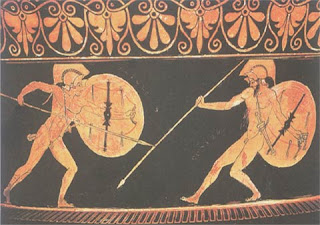 As I’ve said in my last two posts on Song of Wrath: the Peloponnesian war begins, JE Lendon is keen to stress the role that revenge plays in that conflict and, indeed, in all conflicts.

The mechanism of revenge, Lendon says, starts with an insult (ὕβρις/hybris) – amounting to a calculated attempt to demean and cause an affront to honour (τιμή, timē) – which induces an ‘overpowering wrath’ and necessitates vengeance.

Only when revenge is accomplished is wrath ameliorated and honour restored. But, as Lendon points out, and demonstrates with examples from Homer and tragedy, this pattern – from humiliating insult to wrath to revenge to restoration of honour – is not a redemptive process. Rather, it is a process (directed by the Furies) involving chaos, frenzy and self-destruction. Such a process – of chaos, frenzy and self-destruction – is what ultimately characterises the Peloponnesian war.

Revenge not only defines the conduct of the Peloponnesian war but also goes to the heart of the dispute between Athens and Sparta, which is a dispute, according to Lendon (stressing the importance of Homeric ethics in classical Greece) about rank – about Sparta’s determination to retain its ascendant position in Hellas and Athens’ attempt to compel Sparta to accept its burgeoning status.

Shaming is the weapon of choice to undermine, reinforce or elevate rank in the classical Greek world and, as such, the Peloponnesian war begins with punitive Spartan raids into Attica, looting, ravaging and wasting of land, which are reciprocated not by full-scale hostilities but by similarly pernicious Athenian raids into Laconia and against Sparta’s Peloponnesian allies.

Attacking your enemy’s allies is a crucial tactic in this war of reputation, retribution and shaming because it aims to prove that you are incapable of defending your subordinate confederates and are unworthy of your hegemonic position.

Thus, in the first years of the war, Athens moves on from raids against Elis and Messinea in the Peloponnese and expands its theatre of operations to Halkidiki in northeastern Greece where, in an attempt to prove the limitations of Sparta’s reach and power, Athens attacks and seizes pro-Spartan Potidaea.

Sparta responds to this humiliation by attacking an Athenian protectorate, Plataea, in Boeotia; but when Plataea holds out, Sparta seeks to undermine Athenian prestige and restore its own by encouraging the Mytelineans to break free from the Athenian sphere of influence (and fulfill Myteline’s long-term ambition to exert authority over the whole of Lesvos). Athens crushes the Mytelinean revolt, prompting the Peloponnesians to try a similar shaming maneuver in Corcyra. Here, they sponsor a pro-Spartan oligarchic coup, triggering years of strife and carnage on the island, which comes to epitomise the loathing and vindictiveness of this Greek civil war.