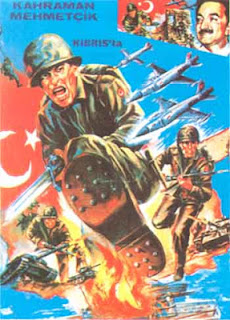 In previous posts in this series based on Stella Soulioti’s Fettered Independence: Cyprus, 1878-1964, we’ve established that Turkey’s Cyprus policy envisaged partition of the island, in pursuit of which it was necessary to demonstrate that Greek and Turkish Cypriots could not live together and had to be separated into two distinct geographical and political units – this despite the fact that Greek Cypriots amounted to 80 percent of the Cypriot population and dominated in all areas of the island. In pursuit of partition, violence was used by Turkish nationalists on the island to crush dissent within the Turkish Cypriot community; to stir up enmity between Greek and Turkish Cypriots; and to create the conditions for the separation of the island’s two communities.


Read parts one, two and three in the series.

Turkish Cypriot violence in pursuit of partition
[From] 1956 on, the Turkish leadership instituted a vigorous campaign under the slogan ‘from Turk to Turk’, advocating the boycott of Greek goods and services and forbidding cooperation with Greek Cypriots at all levels, including participation in mixed trade unions. Those who deviated were denounced as traitors and punished: two Turkish Cypriot members of a trade union were shot dead by [the terrorist group] TMT in 1958 for collaborating with their Greek Cypriot coworkers…

To bring about the physical separation of the two communities and to impose territorial division, the Turkish Cypriots, at the instigation and with the encouragement of Turkey, embarked, beginning in January 1956, on organized rioting initially aimed at the destruction of Greek Cypriot property. The object was to foster enmity between the two communities, thereby proving [Turkish Cypriot leader Fazil] Kutchuk’s premise that coexistence had become impossible, making partition the only acceptable solution.

As was inevitable in view of the large number of Turks actively participating with the British security forces against EOKA, the day came when, on 11 January 1956, a Turkish Cypriot police sergeant who had given evidence in trials of EOKA members was killed by EOKA. The Turkish Cypriots immediately retaliated by attacks against Greek Cypriot property in Nicosia and Paphos accompanied by threats against Greek lives. These were followed by further attacks on 23 and 24 April, after the killing of a Turkish Cypriot policeman who had chased EOKA fighters. On 25 May, after the death of a Turkish Cypriot policeman who again had chased an EOKA fighter who had turned and shot him, extensive rioting broke out in Nicosia, Limassol, Larnaca and Paphos, with indiscriminate arson of Greek properties. In Nicosia the Turks burst into the Greek quarter of the city and burned down an oxygen factory, battering its old caretaker to death. The Turkish mob, ‘including a score of auxiliary and special constables’, became so menacing that the British authorities set up a barricade across the old city of Nicosia (the ‘Mason-Dixon Line’, a precursor to the ‘Green Line’ drawn in December 1963). By June 1956 Turkish rioting extended to Famagusta and flared up once again in Nicosia, with massive destruction of Greek property, in January and February 1957.

The Turkish leadership had no scruples about creating pretexts for reprisals. Soon after Sir Hugh Foot’s arrival in Cyprus [as the new colonial governor], clashes occurred on 7 and 9 December 1957 between the security forces and Greek secondary schoolchildren demonstrating on the occasion of the UN General Assembly debate on Cyprus, in the course of which a Turkish policeman was wounded accidentally. A fabricated rumor that he had been killed, and killed by Greeks, formed the signal for Turkish  mobs to throw themselves into the Greek quarter of Nicosia with such ferocity that the Mason-Dixon Line had to be reestablished. Nor was calculated misrepresentation of the facts considered improper: at the United Nations on 9 December 1957, Turkey did not hesitate to accuse Greeks of killing three Turks in Paphos a week earlier, whereas they had been killed by fellow Turks who had been arrested.

What is noteworthy is that, despite the repeated, organized and violent rioting and destruction of their property by the Turks, the Greeks, although outnumbering the Turks by four to one, did not counter-attack or retaliate in any way. No Turkish property was threatened or damaged. In fact, on 3 February 1957, the Greek members of the Nicosia Municipal Council appealed to the Greek population to avoid at all costs any friction with the Turkish community.

The most violent riots were yet to come. On 21 January 1958, Turkish Cypriots demonstrated in Nicosia and Famagusta against what they regarded as the pro-Greek policy of the new governor, Sir Hugh Foot. More demonstrations, the most violent ever known in Cyprus, took place in Nicosia on 27 January 1958. These were organized to coincide with the discussion of the Foot Plan in Ankara between British foreign secretary Selwyn Lloyd, accompanied by Sir Hugh Foot, and the Turkish government. During the disturbances, thousands of Turks hurled stones and bottles at British troops, overturned and set fire to military vehicles and police cars, and erected barricades in the Turkish quarter of Nicosia, prominently displaying Turkish flags. After several attempts by British troops to break up the demonstrations, a curfew was imposed in the Turkish quarter, ending nine hours of violent rioting marked by many bitter hand-to-hand struggles between Turkish Cypriots and the security forces. Despite the curfew, further riots broke out the following day with renewed attacks on British forces. Order was finally restored on 29 January 1958. ‘The Turks were, as usual, making their stand clear by actions as well as by words,’ was Sir Hugh’s comment on the riots.

In March 1958, after almost a year of continuous truce, EOKA renewed its offensive by an intensive sabotage campaign against military installations. On 21 April 1958, however, it declared a ceasefire pending the outcome of a policy statement by the British government, whereas the Turkish Cypriots, fearing that the new British plan would exclude partition, stepped up their preparations in close cooperation with the Turkish government. In February 1958 a meeting was held in Greece between British foreign secretary Selwyn Lloyd and Greek foreign minister Evangelos Averoff, attended also by the governor of Cyprus, Sir Hugh Foot, and the head of the Cyprus Desk in the Greek Foreign Ministry, Dimitri S. Bitsios. Foot stated that the Turkish Cypriots were now armed and were receiving instructions ‘from somewhere in Turkey’, in the hope that EOKA’s truce would end, providing them with an excuse to embark on their own armed activity against the Greek Cypriots.

The next, and by far most alarming, bout of Turkish Cypriot violence erupted on 7 June 1958, shortly before what came to be known as the Macmillan Plan was announced in the British parliament. Sir Hugh records:

The Turks didn’t even wait for the Plan to be announced. On the night of the 7th June I was woken in the middle of the night to see the whole of Nicosia aflame.

He [Zorlu, the Turkish foreign minister] had, I have no doubt, known of and perhaps himself given the order for the Turkish riots and the attempt to burn down Nicosia.

During that one night of rioting in Nicosia and Larnaca, four Greek Cypriots were killed by Turkish mobs and scores more were injured. Greek properties in the old city of Nicosia were sacked, while shops, a cigarette factory, a timber yard and a Greek sports club were burnt down. The Mason-Dixon Line had to be erected again. In Larnaca, crowds of Turks invaded the Greek quarter and a number of buildings were wrecked. Further serious riots occurred on 10-12 June in Nicosia, Limassol and Famagusta, in which four more Greek Cypriots were killed and many injured. In Nicosia, where bands of Turkish youths engaged in large-scale arson, several Greek shops were burnt to the ground and the ancient church of Saint Lucas was gutted, while in Limassol and Famagusta many people were injured.