Political Activities of Turkey and the Turkish Cypriots, 1945-58. Part Three: The consistency of the policy of partition 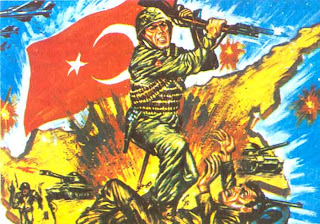 In this third extract from Stella Soulioti’s Fettered Independence: Cyprus 1878-1964, the author describes the consistency with which Turkey, having abandoned its policy in 1956-57 of demanding the whole of Cyprus be annexed to it, pursued its new policy of partitioning the island. In line with this, Soulioti suggests, Turkey regarded the 1959 Zurich-London agreements that delineated Cyprus’ independence as containing the seeds of partition, if exploited correctly.

Read parts one and two in the series.

On Rauf Denktash and the shaping of Turkish political consciousness, read the post here.

Consistency of Turkish Policy of Partition
The Turkish pursuit of partition remained constant  through all the subsequent phases of the recent history of Cyprus. As Hayrettin Erkmen, a member of the Turkish cabinet at the time of the Zurich Agreements [1959] and foreign minister after the invasion of Cyprus in 1974, has revealed: ‘Turkey’s posture on Cyprus might appear to be variable, but actually it adheres to a specific line.’ And he goes on to explain that when the thesis that Cyprus should be returned to Turkey failed, the idea of taksim [partition] was upheld: ‘and later we came upon the formula of a Cyprus Republic which was a kind of taksim’. This objective was paramount in Turkish minds during the Zurich negotiations.

The consistency of Turkish policy is demonstrated by the fact that, following the intercommunal conflict in December 1963, Turkey and the Turkish Cypriots formally proposed to UN mediator Galo Plaza in 1964 the partition of Cyprus along the line indicated in 1957, together with a suggestion for an exchange of populations. That this line is practically identical with that where the Turkish Army finally halted in the second phase of the invasion of Cyprus in August 1974 is eloquent proof of this consistency.

In fact, between the first and second phase of the invasion, on 12 August 1974, during the conference in Geneva between the three guarantor powers, Britain, Greece and Turkey, and representatives of the Greek and Turkish Cypriot communities, the Turkish delegation tabled a proposal demanding as a zone of Turkish control this same line. Moreover, in conformity with its 1964 proposals to the UN mediator, Turkey expelled from their homes and properties in the area occupied by it virtually all Greek Cypriots (about 180,000) and proceeded to compel all Turkish Cypriots to move to the occupied areas, while transporting from Turkey thousands of settlers.