Chaos and goodness: from Hesiod and Plato to Christianity and Nietzsche 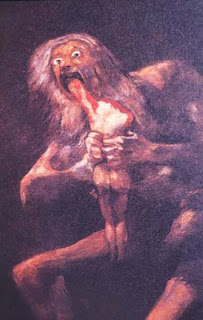 What does Nietzsche mean when he says: ‘Christianity is Platonism for the masses’? An interesting essay, Chaos corrected: Hesiod in Plato’s creation myth, by E.E. Pender, gives us an idea.

The subject of the essay is Plato’s attempt, particularly in the Timaeus but also in the Republic, to establish a new creation myth for the Greeks that would supplant Hesiod’s Theogony, which Plato objected to on the grounds that it wasn’t sufficiently edifying and, indeed, that Hesiod’s depiction of the gods and their role in creating the universe was fundamentally wrong.

In particular, according to Pender, what Plato wants to correct in Hesiod is the ‘moral chaos’ of the Theogony, in which the gods are often portrayed as jealous and spiteful, engaged in plotting, deception and violence. For Plato, god is incapable of malevolence. He is by nature good and his motive in creating the universe is to advance goodness.


‘Unlike Hesiod’s Ouranos, Kronos, and Zeus, Plato’s supreme god is not seeking to create a world order that will allow him simply to gain and then hold on to power. This god and those he creates are themselves good and their aim is to create further goodness.’

Furthermore, Pender says, into Hesiod’s universe, in which chaos is the primal force and strife and power politics define the relationship between the gods, Plato wants to interject a benign and rational being – a demiurge or craftsman-father – able to impose harmony and rationality. Whereas Hesiod identifies a universe permeated by disorder, out of which an ordered cosmos can never fully emerge, Plato sees a world infused with goodness, always striving to achieve perfectibility.

Plato also wants to correct Hesiod when it comes to defining the attributes of the Muses, the goddesses that inspire in the creation of art and the pursuit of knowledge. In Hesiod, the Muses exist to soothe grief and help men forget their troubles; but in Plato they lose their psychogogic qualities and acquire a more transcendental and metaphysical role, which is to guide the human soul (through philosophy and philosophical exercises) towards divine harmony and reason.

In Plato’s creation tale, then, Pender concludes, ‘the principle of goodness is eternally present, the triumph of order and reason is assured by design, human beings have the means to become like gods’.

In which case, to return to Nietzsche and his ‘Christianity is Platonism for the masses’ – a statement, it’s worth stressing, intended to insult Christianity, Platonism and the masses; we can now see that it is not a long road to travel to get from Plato’s ‘eternally present principle of goodness’ to Christianity’s depiction of God as the epitome of goodness; from Plato’s ‘triumph of order and reason assured by design’ to Christianity’s God the Creator and Jesus the embodiment of divine logos; or from ‘human beings [that] have the means to become like gods’, to Christianity’s belief in transfiguration, in which man, innately good (i.e. even if not born good, then always capable of it), aspires, via communion with God or redemption through Jesus, to become suffused by the divine.

* Chaos corrected: Hesiod in Plato’s creation myth is contained in the book Plato and Hesiod, which you can download as a PDF from here.
Posted by John K. at Monday, November 30, 2020