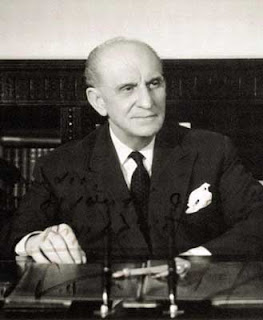 Below is another translated extract from Marios Evriviades’article  (‘Plans for betrayal from 1964’) that argues that the Ioannides coup against Makarios in 1974 was nothing more than the implementation of a Greek policy aimed at partitioning Cyprus with Turkey that had been dreamed up 10 years previously.

In fact, it is striking that the nature of the coup planned by Giorgos Papandreou in 1964 – overthrow Makarios, declare enosis, then open negotiations with the Turks on which part of Cyprus to give them – was precisely what Ioannides had in mind in 1974. It was a stupid idea in 1964 – which is presumably why Papandreou was persuaded to abandon it – and it was an even stupider idea in 1974, the predictable consequences of which were the Turkish invasion and partition of Cyprus not on Greece’s terms but on Turkey’s.

Plans for betrayal from 1964
In August 1964, with the knowledge of the Americans and, previously, with American encouragement (in February 1964, US Assistant Secretary of State George Ball, was the main protagonist), the government  of Giorgos Papandreou drew up a plan for a coup in Cyprus and informed President Johnson’s special Cyprus representative, Dean Acheson, in Geneva of their proposal.

In Geneva, while on the surface the talks taking place between Greece and Turkey on the future of Cyprus were under UN auspices, in practice it was Acheson who was running the show, with his plan or, more correctly, plans for the division of Cyprus. There were many Acheson plans (just as there were many Annan plans), and the Turks accepted only the first one, which would have secured them sovereignty over 30% of Cyprus and the Greek island of Kastelorizo.

From the Greek side, Papandreou accepted the proposal for a leased Turkish base on the island comprising 99 square miles and informed Acheson of this in Geneva in writing on 22 August. Nowhere does there exist a corresponding Turkish letter as to whether Turkey accepted this proposal, but there is a Turkish letter to Acheson dated 28 August, according to which Turkey rejected Acheson’s efforts at mediation because there was no longer on the table an offer that secured Turkey sovereignty over a part of Cyprus.

Earlier, on 23 August, Giorgos Papandreou gave an order by telephone to Greece’s negotiators in Geneva, Sosiades and Nikolareizis, to inform Acheson that Greece could overthrow Makarios within a week, after which ‘immediate enosis’ would be declared and then negotiations would start with the Turks on the basis of the Acheson plan, which would result in Greece providing Turkey with a base area in Cyprus, in the Cape Greco region [south of Famagusta] rather than in the Karpas peninsula, and the granting of minority rights to the Turkish Cypriots. Acheson told Sosiades and Nikolareizis that Washington agreed with the proposed coup against Makarios.
Posted by John K. at Thursday, July 20, 2017