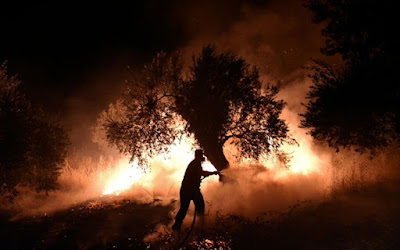 The forest fires currently devastating large swathes of Greece are not the result of climate change nor are they ‘biblical catastrophes’ as the Greek media is fond of calling them.
A biblical catastrophe suggests the fires have some supernatural cause or are divine revenge for the transgressions of wicked humanity. Strangely, those trying to attribute climate change to the disasters, blaming humanity’s mistreatment of the environment, our sinful way of life, our excesses, addiction to unsustainable comforts, have a similarly theological take on global warming and its consequences. It’s not just humanity we need to save, it’s the planet, and the only way we can do this is if we repent and give up the vices we’ve become accustomed to.
Yet, devastating forest fires have been an annual Greek phenomenon for decades. Every summer, there are fires across Greece that wreak havoc, costing lives, livelihoods, damaging property and the eco-system; yet the Greek state has proved consistently incapable in coming up with plans to contain these events and make sure that when they do occur the damage they cause is kept to a minimum.
Moreover, there is nothing to suggest these current spate of fires began spontaneously – from lightening strikes, for example, which would enable us to say that they are the result of natural phenemenon.
Rather, along with political deficiency, the other dominant element in this narrative is that these conflagrations are the result of human intervention.
Writing in the Israeli daily Haaretz, Ruth Schuster notes that 99 percent of the fires that have recently devastated Israel were attributable to human agency.
While it is undeniable that once these fires start, then the desiccation of forests caused by heatwaves and climate change make conditions for fires to exponentially spread, it remains the case that it is idiots, lunatics, criminals and politically-motivated arsonists that, more often than not, start the fires.
Already, in Greece, before the fires have been extinguished, Greek police and media are reporting a number of arrests of Greeks and foreigners on arson-related offences, suggesting the fires are the result of malevolence. The fact that the fires started all over Greece almost simultaneously further suggests the possibility of co-ordination and calculation.
Motives for starting the fires range from spite, madness, profit from the clearing of forests, hatred for the government and a belief that disasters damage it and foreign-sponsored state terrorism.
On the last point, it is noteworthy that this spate of fires in Greece started in the immediate aftermath of forest fires that devastated Turkey. Here, the government of President Recip Tayyip Erdogan was lambasted for its inadequate response to the fires, which some in his party or in government-supporting media blamed on Kurds or Greece.
How convenient, then, that while under pressure at home, with the fires in Greece, Erdogan can point to a country suffering as badly as Turkey, especially when it is part of Turkish pathology to always compare itself to Greece, and in this way distract from his government’s failings.
It is not only Erdogan’s need to turn attention away from his government’s inadequate response to fires affecting Turkey that permits us to speculate as to who might be behind the infernos devouring Greece; it is also the fact that, in the short and medium term, these fires not only cripple the Greek economy, but they also undermine the physical and psychological well-being of a country that Turkey regards as a strategic and geo-political competitor, and which Turkey intends to go to war with when the time is right.
Nor is it the coincidence of the Greek and Turkish fires that allows us to entertain theories of state-sponsored terrorism. In 2015, former Turkish prime minister, Mesut Yilmaz, admitted that in the 1990s Turkish agents were responsible for forest fires that hit the islands of Rhodes, Chios, Samos and Kos.
According to Yilmaz: ‘All [Turkish] prime ministers when they finish their term in office will inform their successors as to how certain secret funds were used.
‘I gave this information to my successor and my predecessors did the same. Erbakan, Ecevit and Demirel informed their successors about the secret funds.
‘Only Tansu Ciller didn’t share information on how secret funds were deployed during her premiership… funds that I later found out were used [to facilitate] a coup in Azerbaijan and for retaliation against Greece’s forests.’
Posted by John K. at Sunday, August 08, 2021