The Feast of the Circumcision 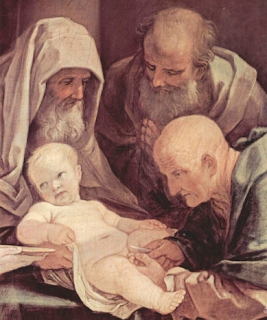 Today is the Feast of the Circumcision, commemorating Jesus’ circumcision, the first occasion on which he shed his blood for humanity, performed, according to Jewish law, when a boy was eight days old.Of course, circumcision did not catch on among early Christians, and for this we must thank the Greeks – first targets of the Jewish apostles and evangelisers – who regarded the ritual as barbaric, something akin to castration.

Indeed, following the conquests of Alexander the Great, when the Greek Seleucid and Ptolemaic empires flourished in Egypt, Syria and Palestine, circumcision became one of the symbolic issues which split the Jews, between the so-called Jewish Hellenisers – those Jews attracted to and influenced by the more prestigious and hegemonic culture of the Greeks – and the Jewish nationalists, resisters of the Greek way of life.

One of the most important components of Greek culture (which the Greeks took with them to the colonies and conquered territories) was the gymnasium, an open-air public arena that combined physical and intellectual training and, in later manifestations, came to resemble a gentleman’s or country club, where city elites gathered to relax, socialise and discuss politics and business.

During physical training, the Greeks, as is well known, liked to exercise gymnos (nude). As such, male gymnasts valued their foreskins – a long, tapered foreskin was regarded as the most attractive – and regarded exposure of the glans as obscene. Greeks, therefore, were offended or amused when Jewish gymnasts turned up in the gymnasium and exercised with their glans on display.

Ambitious Jews, to make their presence more acceptable in Greek gymnasia, would often undergo an epispasm, a surgical procedure that stretched the foreskin to cover the glans, a circumcision in reverse; proof to fundamentalist Jews of the erosion of adherence to Jewish law and the penetration of Greek cultural standards. Jewish reactionaries were also scandalised by the brazen nudity on show at Greek gymnasia, which they regarded as immoral and shameful.

The tension among Jews created by contact with Greek culture reflected Jewish class conflict, between a Jewish urban elite – more attracted and susceptible to syncreticism and Greek culture – and the more fanatical anti-Greek Jewish masses and rural population.

Eventually, increasing resentment and agitation among the Jewish lower classes prompted a crackdown by the Seleucid emperor Antiochus IV Epiphanes, which led to even fiercer Jewish resistance to Hellenism and the Maccabean war – which has gone down in Jewish history as a triumph of Jewish purists over Jewish Hellenisers and is the basis of the annual Hanukah festival.

Anyway, in the early years of Christianity, this Greek aversion to circumcision – reflecting residual Greek sensuality and love of the human form, horror at bodily mutilation and concern that the practice was too Jewish – meant that it did not find its way into Christian ritual and thinking – if circumcision was an act of ritual cleansing, as the Jews maintained*, then, according to Christian propagandists, such as St Paul, it is the heart not the penis or any other bodily appendage that should be circumcised/cleansed – of pride, vanity and all the rest of it.

Nevertheless, six centuries later, Jewish doctrine and practice found more fertile ground in the Arabian desert, among Mohammed and his followers, who accepted the Jewish wariness of the human body and  human sexuality.
* According to Rabbi Shraga Simmons: ‘It is a foundation of Judaism that we are to control our animal desires and direct them into spiritual pursuits. Nowhere does a person have more potential for expressing “barbaric” behavior than in the sex drive. That's why the Bris [covenant of the circumcision] is done on this specific organ. If we bring holiness into our life there, then all other areas will follow.’
Posted by John K. at Friday, January 01, 2021