On the grizzly fate of Byzantine emperors 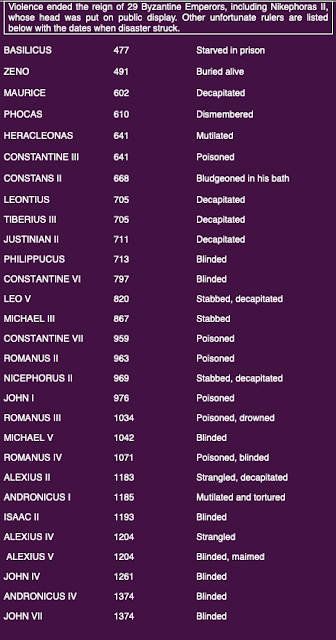 Philip Sherrard’s book, Byzantium, is an introduction to the empire, its politics, history and culture. Published in 1967, as part of Time-Life’s Great Ages of Man series, it is as immaculately written and illustrated. My favourite chapter is the one on the nature of the emperor in Byzantium – An Emperor Under God.
Here, Sherrard manages to get to a great Byzantine paradox: that while the rulers of the empire were regarded as divine – ‘as the chief representatives of Christ and of God Himself’ – and, indeed, God-like, since the emperor’s duty was to bring ‘all mankind into ordered harmony within a universal state under the ordered rule of the monarchy’, thereby replicating God’s mission of bringing ‘all heavenly principalities into an ordered harmony under His absolute rule’; then how do we account for the fact that throughout the 1,000 years of its history, the Byzantine Empire was known for the precariousness of its throne and for the ruthlessness of its court politics – the viciousness with which supposedly God-like emperors were replaced or overthrown – all of which resulted in 29 of the 88 emperors who ruled the empire meeting grizzly fates – decapitated, poisoned, stabbed and so on – while another 13, to avoid such an end, retreated to live in monasteries?

Sherrard offers this explanation for the Byzantines’ apparent disregard for the sacredness of their emperors. Since, Sherrard says, an emperor emerged by divine decree – i.e. it was the will of God and the will of God is by definition opaque – this meant that the ‘only certain method of knowing the divine will was to see who 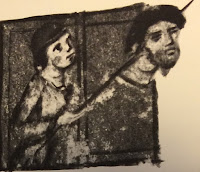 actually occupied the throne. In other words, all means of becoming an emperor were legitimate – so long as they were successful. An unsuccessful attempt to reach the throne, on the other hand, was unforgivable and disastrous for the would-be ruler.’
‘Furthermore,’ Sherrard goes on, ‘what God had given He could also take away. An emperor’s throne might be seized from him in as unpredictable and sudden a manner as it had been given to him in the first place – and the consequences for him were usually as terrible as if he had tried to seize power and failed.’
Posted by John K. at Monday, January 04, 2021