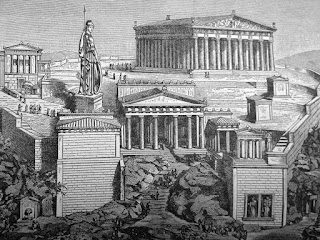 In Athens’ democracy it was common for politicians to be brought before the courts and assembly to justify policies and be fined, disbarred, ostracised, even put to death, if found guilty of malicious undertakings. One such procedure was graphe paranomon (accusation of unlawfulness) described by Cornelius Castoriadis thus:


'You have made a proposal to the ecclesia [assembly of citizens], and this proposal has been voted for. Then another citizen can bring you before a court, accusing you of inducing the people to vote for an unlawful law. You can be acquitted or convicted – and in the latter case, the law is annulled. Thus, you have the right to propose anything you please, but you have to think carefully before proposing something on the basis of a momentary fit of popular mood and having it approved by a bare majority. For the action would be judged by a popular court of considerable dimensions (501, sometimes 1,001 or even 1,501 citizens sitting as judges), drawn by lot. Thus, the demos was appealing against itself in front of itself: the appeal was from the whole body of citizens (or whichever part of it was present when the proposal in question was adopted) to a huge random sample of the same body sitting after passions had calmed, listening again to contradictory arguments, and assessing the matter from a relative distance. Since the source of the law is the people, "control of constitutionality" could not be entrusted to "professionals " – in any case, the idea would have sounded ridiculous to a Greek – but only to the people themselves acting in a different guise. The people say what the law is; the people can err; the people can correct themselves. This is a magnificent example of an effective institution of self-limitation.'