Castoriadis on the objectivity of the Greeks 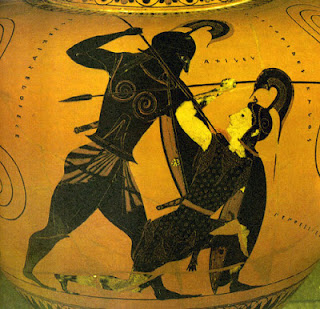 Just to go back to a post I wrote a couple of weeks ago, Thermopylae, the Persian invasions and Greek triumphalism, in which I insisted that the pride and sense of superiority characteristic of Greek culture was tempered by self-criticism and objectivity, this idea is found in Cornelius Castoriadis’ essay, The Greek Polis and the Creation of Democracy (in Politics, Philosophy, Autonomy), from which the following is an excerpt:

‘Hannah Arendt has rightly said that impartiality enters this world through the Greeks. This is already fully apparent in Homer. Not only can one not find in the Homeric poems any disparagement of the “the enemy”, the Trojans, for example, but the truly central figure in the Iliad is Hector, not Achilles, and the most moving characters are Hector and Andromach. The same is true for Aeschylus’ Persians – a play performed in 472 BC, seven years after the battle at Plataea, with the war still going on. In this tragedy, there is not a single word of hatred or contempt for the Persians; the Persian queen, Atossa, is a majestic and venerable figure, and the defeat and ruin of the Persians is ascribed exclusively to the hubris of Xerxes. And in his Trojan Women (415 BC), Euripides presents the Greeks as the cruelest and most monstrous beasts – as if he were saying to the Athenians: this is what you are. Indeed, the play was performed a year after the horrible massacre of the Melians by the Athenians (416 BC).’
Posted by John K. at Sunday, October 04, 2020