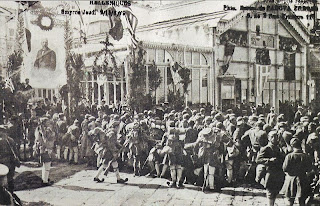 Thanks to the HA reader who suggested I go here and watch the talks and Q&A (in English) from professors Giorgos Mavrogordatos and Ayhan Aktar on the 1923 population exchange agreements between Greece and Turkey that saw 1.5 million Greeks from Asia Minor, Anatolia and Thrace resettled in Greece and half a million Turks go the other way.

Mavrogordatos suggests that the exchange was the best, or at least most pragmatic, outcome to the failed attempt by Greece to liberate Ionia.

Arguing in favour of homogenous nation-states, Mavrogordatos says that the Ottoman Greeks provided a means to complete the Hellenisation of those territories (especially Macedonia) liberated during the Balkan wars; ensured, with the expulsion of Muslims from Greece, that Greece didn’t end up with a problematic Muslim minority, which would now number three million; and that, indeed, since Turkey’s preferred method of dealing with minorities in its midst was physical destruction, having some sort of agreed relocation was the only way to guarantee the survival and future of 1.5m Greeks.

On the other hand, the Turkish professor bemoans the population exchange, guided as it was, he argues, by narrow, nationalist definitions of ethnic identity, which ended up impoverishing both countries and was a disaster for those directly affected.

The discussion to be had on the issues raised is inexhaustible, but I’ll just make a couple of points.

Having experienced the humiliating trauma of the decline and disintegration of the Ottoman empire, the new Turkish republic couldn’t countenance the continuing presence of Armenians, Assyrians and Greeks and had an unambiguous policy of annihilating its Christian minorities. This decisive approach is in contrast to the policy of Greece towards non-Greeks in the territories it had liberated in 1913 and was expecting to annex in Asia Minor.

Eleftherios Venizelos was torn between creating a Greece that would be a liberal multi-ethnic state in which non-Greeks (Muslims, Jews and Bulgarians) would be full citizens and have their rights and identities protected, and a more homogenous country, insensitive to its minorities, who would be subordinate to the dominant Greek element and encouraged to assimilate or, in the worst-case scenario, face exchange with Greeks living in Rumelia and Turkey. (Exterminating its minorities, as Turkey was prepared to do, did not appeal to Greece).

In Ionia, Venizelos was inclined to the former policy, insisting that the Turks living in the newly liberated areas should experience no discrimination and be won over to the benefits of Greek government – though at other times (as Mavrogordatos notes) he contemplates exchanging the Turks in Ionia for Greeks living in parts of Anatolia not liberated by the Greek army.

Informing Venizelos’ view of the Turks as susceptible to the advantages of enlightened Greek rule was a sense that Turks were less conscious of their national and religious identity than Greeks. This ignorance of the Turks had disastrous consequences for Greek rule in Ionia. More ruthless treatment of the Turks in Ionia may have suited Greek interests better, though it would have risked alienating Greece’s European allies who, hypocritically, made their support conditional on Greece proving its credentials as a civilised country by the fair treatment of the non-Greek population under its jurisdiction.

A similar Greek underestimation of Turkish nationalism was also evident later in Cyprus where, it should be pointed out that, after the Turkish invasion in 1974, the 200,000 Greeks forced from northern Cyprus and 50,000 Turks encouraged (by Turkey and Britain) to leave the government-controlled for the occupied areas – were not, according to the Turks, ethnically cleansed but the necessary victims of an agreed population exchange.
Posted by John K. at Sunday, September 06, 2020