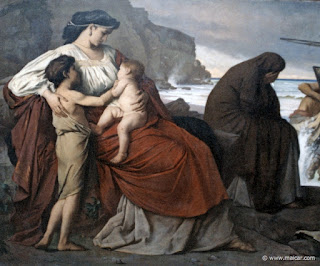 Of all the seductive, sinister and transgressive women who have haunted the Western imagination, none has a reputation more lurid than Medea’s. (Margaret Atwood)

The city is founded on a monstrous deed. (Medea)

East German writer Christa Wolf’s Medea is a harrowing novel that seeks to retell the story of the Colchian princess and rehabilitate her from evil, barbarian witch to knowing foreigner and immigrant who can see the hypocrisy, lies and violence on which Corinth (the city she is exiled in with her feeble husband Jason) is organised and ruled. Such a woman, who has learned the dirty secrets of Corinth’s power elite, which is now struggling with political unrest and natural disaster, is dangerous and has to be discredited and destroyed, and this, Wolf suggests, is the process by which Medea is turned into a scapegoat and comes to be falsely accused of killing her children and murdering Glauce, the Corinthian princess Jason has abandoned her for.

The novel is written as a series of voices, as each protagonist feints, plots and manoeuvres as the crisis engulfing Corinthian society unfolds, and below is an excerpt from one of Medea’s monologues:

‘So this is how it is: either I’m out of my mind, or their city is founded on a crime. No, believe me, I’m quite clear on this point, what I say or think about it is quite clear to me, for I’ve found the proof, yes, I’ve touched it with my own hands. Oh, it’s not arrogance that threatens to undo me now. The woman – I simply followed her. Perhaps I just wanted to teach Jason a lesson, since he’d stood by and let them seat me at the end of the table among the servants, that’s it, I didn’t dream that, that was yesterday. At least they’re the highest-ranking servants, he said pathetically, don’t cause a scandal, Medea, please, not today, you know what’s at stake, the King can’t lose face in front of all his foreign guests. Ah, Jason, save your breath. He still hasn’t understood that King Creon can’t grieve me anymore, but that’s not what I’m talking about, I have to clear my head. I have to promise myself never to speak about my discovery to a living soul. The best thing would be to do what Chalciope and I used to do with secrets when we were children, do you know what that was, Mother? We’d wrap our secret up tight in a leaf and eat it up while staring into one another’s eyes. Our childhood – or rather everything in Colchis – was full of dark secrets, and when I arrived here, a refugee in King Creon’s gleaming city-state of Corinth, I had an envious thought: these people have no secrets. And that’s what they think too, that’s what makes them so convincing; with every look, with every one of their measured movements, they’re drumming it into you: Here’s one place in the world where a person can be happy. It was only later that I realized how much they hold it against you if you express doubts about their happiness. But that’s not what I’m talking about either, what’s the matter with my head? It’s buzzing with a whole swarm of thoughts, why is it so hard for me to reach into the swarm and snatch out the one thought I need?’