On Steven Runciman’s 1453: The Fall of Constantinople 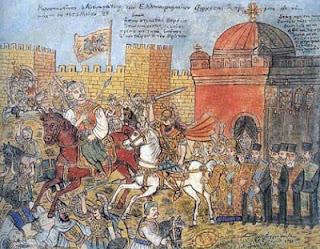 I’m not sure if there’s much consolation in being a tragic hero – better to prevail than be transfigured – but tragic heroes is precisely how Steven Runciman describes the Greeks in his essential account of the siege and fall of Constantinople to the Ottoman Turks in 1453, which has recently been reissued by Canto Classics.

Beleaguered, outnumbered 10 to one, waiting in vain for the Western aid they had been promised for agreeing to church union, the Greek defenders (and a small group of Genoan and Venetian confederates) refused the besieging sultan’s offer to surrender Constantinople or convert to Islam, and chose instead to trust in their own bravery, the righteousness of their cause and divine intervention to preserve one of the last vestiges of Greek liberty.

But after two months of relentless siege and assault, the Turkish
warlord, Sultan Mehmet, frustrated by the resistance of the Greeks, ignoring the advice of some of his commanders to lift the siege and avert further humiliation, decided to make one, final overwhelming attack to take the city.

The speeches made by the Greek and Turkish leaders on the eve of the decisive assault reveal what the two sides believed they were fighting for.

The Byzantine emperor Constantine Palaiologos tells his soldiers that a man should always be prepared to die for his faith or country, his family or sovereign; but now, he says, we are being asked to give up our lives for all four; while Mehmet’s words to his forces are in stark contrast to the heroism and dignity of the Greek emperor. Mehmet urges his troops on by reminding them of the three days of looting they will be allowed should they capture the city, and he inspires his commanders not only with the promise of booty, but also by stressing their sacred duty as Muslims to vanquish this famous Christian capital.

And indeed, once Constantinople is taken, the story of the city becomes one of plunder and depredation.

Runciman describes the pillaging of private homes, churches, businesses; the massacres of men, women and children, the ‘rivers of blood running down the streets’; a slaughter that only abated when the Turkish soldiers realised that keeping the Christians alive and selling them as slaves was a better idea, not that this spared the elderly, infirm and infants who could bring no profit, and were consequently killed on the spot.

As commander in chief, Mehmet was entitled to the greatest share of the loot, which he had paraded before him so he could decide precisely what he wanted. Then the sultan selected 1200 Greek children to be sent as slaves, 400 each, to the three most important Muslim rulers of the time, the sultan of Egypt, the king of Tunis and the king of Grenada; while, from the most prominent Byzantine families, Mehmet had his pick of youths, girls and boys, for his personal seraglio, with those resisting a life of sexual slavery being put to death, as Runciman illustrates with the case of the Grand Duke Lucas Notaras and his son and son-in-law:


‘Five days after the fall of the city [Mehmet] gave a banquet. In the course of it, when he was well flushed with wine, someone whispered to him that Notaras’s fourteen-year-old son was a boy of exceptional beauty. The Sultan at once sent a eunuch to the house of the [Grand Duke] to demand that the boy be sent to him for his pleasure. Notaras, whose elder sons had been killed fighting, refused to sacrifice the boy to such a fate. Police were then sent to bring Notaras with his son and his young son-in-law, the son of the Grand Domestic Andronicus Cantacuzenus, into the Sultan’s presence. When Notaras still defied the Sultan, orders were given for him and the two boys to be decapitated on the spot. Notaras merely asked that they should be slain before him, lest the sight of his death should make them waver. When they had both perished he bared his neck to the executioner. The following day, nine other Greek notables were arrested and sent to the scaffold.’

But even if Runciman does not flinch from describing the Turkish capture of Constantinople as being a ‘ghastly story of pillage’ and is not prepared to cover up Mehmet’s ‘savageries’; he is not a crude Orientalist, out to demonise the Turks and Islam and portray Byzantium’s demise in terms of a heroic West versus a barbaric East.

For not only would associating Byzantium with the West be problematic, but it is also clear that, for Runciman, the external agents most responsible for the downfall of Byzantium were not the Turks, but the Franks and Latins, with the disaster of 1453 overshadowed by the catastrophe of the Fourth Crusade in 1204, during which Western Crusaders seized and devastated Constantinople and dismembered and irreparably weakened the Greek empire.

In the third volume of his history of the Crusades, Runciman famously says that ‘there was never a greater crime against humanity than the Fourth Crusade’, and describes the sacking of Constantinople in 1204 as an act of ‘barbarous brutality’, ‘unparalleled in history’, committed by ‘Frenchmen and Flemings… filled with a lust for destruction’.

Thus, the powerful, wealthy and magnificent city seized and sacked by Crusaders in 1204 (and which the West held until 1261, before Greek restoration), was not the city the Turks captured in 1453, which Runciman describes as dying and melancholy, poverty-stricken and sparsely populated.

For Runciman, the Turkish seizure of Constantinople in 1453 did not destroy Byzantium, it merely provided the coup de grâce to a doomed city.

Indeed, memories of 1204 and experience of repressive Western rule in places like Crete, Cyprus and the Peloponnese, provided evidence to many Greeks that the pursuit of church union with Rome in exchange for military support to fight the Turks was both a religious abomination and politically misguided. Not only was there no difference in terms of brutality between Western and Muslim rule – indeed, many Greeks believed the Franks and Latins to be less civilised than the Turks and Muslims; and not only did the policy of church union overestimate the ability and willingness of the West to aid Byzantium against an assertive and powerful Turkish empire; but there was also a case for maintaining the integrity of the Greek church and Greek culture, avoiding the bitter division bound to follow any attempt to enforce religious subordination to Rome, and accepting a period of Turkish subjugation as the most effective way of preserving the Greek nation and offering the best chance for its long-term revival.

Nevertheless, Runciman’s reluctance to demonise the Turks does, in places, lead him to express an undeservedly generous assessment of their ascent to power and rule, which is matched by an excessive willingness to pin the blame for Byzantium’s tragedy on the West.

Thus, after Byzantine defeat at the Battle of Manzikert (1071), Runciman is keen to stress the ‘orderly and tolerant state’ established in Anatolia and Asia Minor by the Seljuk Turks. He describes their government as ‘wise and able’ and argues that ‘the transition of Anatolia from a mainly Christian to a mainly Moslem country was achieved so smoothly that no one troubled to record the details’. Similarly, Runciman praises Osman, the founder of the Ottoman dynasty, as a ‘leader of genius’, while his son, Orhan, is described as a ‘great ruler’, whose administration was so reasonable that many of his Christian subjects preferred it to that of the Byzantines. There were no forced conversions, Runciman declares, and apostasy only occurred when Christians followed a natural inclination to join the religion of the ruling class. As for Mehmet, Runciman says, despite his savageries and the destruction in the immediate aftermath of conquest, under his rule, Constantinople was rebuilt and soon became a thriving city of commerce and finance. ‘Long before his death in 1481,’ Runciman writes:


‘Sultan Mehmet could look with pride on the new Constantinople… Since the conquest its population [of Turks, Greeks, Jews and Armenians] had increased fourfold; within a century it would number more than half a million. He had destroyed the old crumbling metropolis of the Byzantine Emperors, and in its place he had created a new and splendid metropolis in which he intended his subjects of all creeds and all races to live together in order, prosperity and peace.’

However, the ‘details’ that Runciman said do not exist to record the Islamisation of Anatolia and Asia Minor are, in fact, painstakingly chronicled by Spyros Vryonis in his The Decline of Medieval Hellenism in Asia Minor and the Process of Islamization from the Eleventh through the Fifteenth Century, in which the author describes a period of savage conquest, a succession of raids and annexations characterised by pillaging, massacre, enslavement and forced conversion of the Byzantine population. Thus the four centuries it took the Turks, from 1071 to 1453, to subjugate Anatolia, Asia Minor and Thrace, did not involve, as Runciman suggests, a ‘smooth’ evolution but was accomplished in a way that amounted to a holocaust for the vanquished.

As for Mehmet’s alleged vision of a tolerant, harmonious empire, this never materialised and could never materialise, given the nature of the Ottoman state, in which religious discrimination and persecution were ingrained. Order was maintained through terror and repression and peace dependent on the whims of the sultan or his pashas or beys who, at any moment, could decide that their Christian subjects, their culture, shrines and very lives, were an affront to Muslim ascendancy and should be suppressed if not extinguished.

Moreover, just as there were Greeks who believed, prior to the fall of Constantinople, ‘better the sultan’s turban than the cardinal’s hat’*, many others, from the political and intellectual elite, admired the West and believed church union would bring about a rich fusion of Greek and particularly Italian humanist culture. Indeed, something of this fusion occurred in Crete and the Ionian islands, on the periphery of the Greek world, where Turkish rule was delayed or never penetrated, with Venetian sway eventually contributing to a cultural breathing space and even flowering for Greeks that was never possible under the Turks. As Runciman himself acknowledges, the Ottomans’ narrow-mindedness, informed by fear and loathing of their Christian subjects, ensured that Greek learning, art and letters were discouraged and ceased to exist for the duration of the Turkish empire.

* Ironically, this statement is attributed to Lucas Notaras, who, as noted above, was executed for refusing to give up his son to become the sultan’s sexual slave.
Posted by John K. at Thursday, November 23, 2017