Themistocles and Athens at the peak of their careers 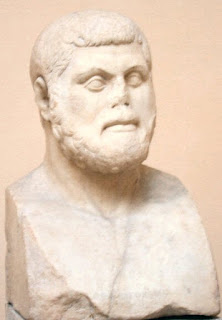 Themistocles, the visionary Athenian statesman and soldier, realised that despite the Athenian victory at Marathon (490 BC), Persian ambitions to conquer Greece had not abated, and that the Persians were bound to try again.

As such, Themistocles sought to persuade the Athenians that their city had to become a naval power and build a fleet in preparation for an inevitable Persian invasion. Despite much opposition and skepticism, the Athenians eventually accepted Themistocles’ advice – a fleet was built; the Persian armada was routed at Salamis (480 BC); Athens became a maritime (and imperial) force; and Athenian democracy, buoyed by its military success and the repercussions of its citizens being recast as sailors from soldiers (see this post), entered its most radical and creative phase.

Now, I normally have Themistocles on the brain because his perception of a threat from the east, and his insistence that Athens prepare to meet it, has obvious parallels for contemporary Greece. However, today, I was also reminded of the incident recorded in Plutarch, in which Xerxes’ ambassadors arrive in Athens to relay the Persian king’s demand for earth and water, i.e. the city’s subjection, only for Themistocles to have their interpreter put to death for daring to utter the barbarians’ insulting orders in Greek.

It’s a remarkable scene, which the Romanian writer EM Cioran draws this pertinent moral from:


‘A people commit such an act only at the peak of its career. It is decadent, it is dying, when it no longer believes in its language, when it stops believing that its language is the supreme form of expression.’