Castoriadis on Plato, the Greeks and living without hope 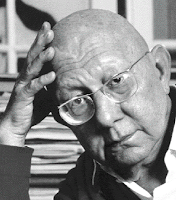 In a previous post, I looked at Plato’s disavowal of Hesiod’s depiction of a universe underpinned by chaos in favour of a view of the world permeated by goodness and noted the far-reaching ontological and philosophical implications this had, especially in the formation of Christianity.

Cornelius Castoriadis  is also interested in Plato’s break with the classical Greek vision of the world. For Castoriadis, the Greek perception of Being as Chaos – at the heart of which is the tragic imaginary showing that ‘not only [are] we not masters of the consequences of our actions, but we are not even masters of their meaning’ – is substituted by Plato with a religious or quasi-religious ontology in which Being equals the Good equals Wisdom equals the Beautiful. Thus, Plato, Castoriadis says, rejects the ‘nucleus of the Greek imaginary’ – in which there is an absence of order for man – and replaces it with a theological and unitary ontology that presumes an underlying harmony and rationality in the world.

Castoriadis describes Plato’s innovation as a ‘philosophical monstrosity’ and argues that it has parallels with other theological and unitary ontologies, such as Hebraico-Christianity (with its belief in the Promised Land, resurrections, messiahs and the afterlife), and liberalism and Marxism, with their belief in progress and human perfectibility.

Castoriadis illustrates Plato’s rupture with the classical Greek vision of the world by looking at how the latter would have addressed Kant’s three fundamental questions of philosophy: What can I know? What should I do? and What am I allowed to hope?

On the first two questions, Castoriadis says, the Greeks initiated an illimitable discussion that precluded ever arriving at a categorical ‘Greek answer’. However, on the third question, What am I allowed to hope? the Greeks did provide ’a definite and clear answer, and this is a massive and resounding nothing’.

Castoriadis goes on that hope


‘is not to be taken here in the everyday trivial sense – that the sun will again shine tomorrow, or that a child will be born alive. The hope to which Kant refers is the hope of the Christian or religious tradition, the hope corresponding to that central human wish and delusion that there be some essential correspondence, some consonance, some adequatio, between our desires and decisions, on the one hand, and the world, the nature of being, on the other. Hope is the ontological, cosmological, and ethical assumption that the world is not just something out there, but cosmos in the archaic and proper sense, a total order which includes us, our wishes, and our strivings as its organic and central components. The philosophical translation of this assumption is that being is ultimately good. As is well known, the first one who dared to proclaim this philosophical monstrosity clearly was Plato – after the classical period had ended’.

As for the pre-classical and classical Greeks, Castoriadis says, their denunciation of hope and robust belief that the world can never be fully ordered (that the only order that exists is the order Anaximander describes, which is order through catastrophe, Being as creation and destruction), has profound implications for the way they did politics and philosophy:


‘For Hesiod, hope is forever imprisoned in Pandora’s box. In pre-classical and classical Greece, there is no hope for an afterlife: either there is no afterlife, or if there is one, it is worse than the worst life on earth – as Achilles reveals to Odysseus in the Land of the Dead. Having nothing to hope from an afterlife or from a caring and benevolent God, man is liberated for action and thought in this world.’