Socrates on how to reverse the decline of Athens 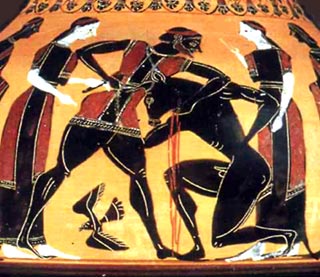 I mentioned in a previous post how, for classical Greeks, identity, self-perception and psychology were significantly configured by a mix of history and myth.

In fact, I came across a good illustration of this when reading Xenophon’s account of a conversation between Socrates and Pericles the Younger, on the subject of how to revive a declining Athens.

The dialogue would have taken place towards the end of the Peloponnesian war, when Athens was staring defeat in the face, and, obviously, before 406 BC when the aforementioned Pericles the Younger (son of Aspasia and the outstanding statesman of Athens’ Golden Age, Pericles) was tried and executed, along with five other generals in charge of Athenian forces at the naval Battle of Arginusae (406 BC).

The battle was brilliantly and surprisingly won by Athens, but the commanders, after they had allegedly neglected to rescue shipwrecked Athenian sailors and retrieve the Athenian dead from the sea, were charged with dereliction of duty. The kangaroo court and subsequent execution of the six amounted to another in a long line of shameful and self-destructive decisions by the Athenian citizenry during the Peloponnesian war, (a decision which, again, in true Athenian style, the Athenians were to repent… at leisure. Indeed, both men in Xenophon’s dialogue – Socrates and Pericles the Younger – were unjustly executed, via hemlock, victims of the degenerative tendency of Athenian democracy).

Anyway, as I said, what interested me in the exchange is that Socrates’ remedy for reversing Athenian decline – which is, essentially, a conservative, nationalist remedy (let’s assume it’s not the ultra-conservative Xenophon putting words into the philosopher’s mouth) – is based on an appeal to Athenians’ historical and mythical past. Socrates not only stresses the lessons to be learned from Athenian heroism in the Persian wars, fought only two to three generations previously; but also recommends for mimesis the great deeds of legendary figures such as Erechtheus and Theseus. The conversation, an extract of which is below, gives us a strong sense of the discourses at work in formulating Greek identity.

SOCRATES: Since we wish them [the Athenians] to strive to be the first in virtue, we must then show them that it is their special inheritance from olden days, and that by striving for this they may become superior to all men.

PERICLES: How can we teach them this?

SOCRATES: By reminding them, I think, that their earliest ancestors of whom tradition tells, were really as great as they have heard.

PERICLES: Do you refer to the judgment of the gods which Cecrops and his men pronounced because of their virtue?

SOCRATES: I mean also the birth and childhood of Erecthheus, and the war he waged against the men from all the adjacent lands, and the war of the sons of Heracles against the inhabitants of the Peloponnese. I refer, also, to all the wars waged in Theseus’ time, in all of which our ancestors proved clearly that they were better than their enemies. If you wish, I mean what their descendants did later, a little before our time: by themselves, they fought against the masters of all Asia and Europe as far as Macedonia, against men who possessed the greatest power and wealth the world had ever seen and who had performed the most daring deeds…