The roots of Greece's betrayal of Cyprus are deep

The Greek daily Ta Nea reported today that it had unearthed classified American documents describing conversations that took place in Athens in June 1965 between an unnamed senior US diplomat and Konstantinos Mitsotakis regarding the political crisis affecting Greece at the time – which eventually led to the colonels' coup in April 1967 – and the situation in Cyprus.


Mitsotakis was then minister of economy in Giorgos Papandreou's Centre Union government, a government he eventually helped to bring down. Post-1974, Mitsotakis continued to play a prominent role in Greek politics, serving as prime minister from 1990 to 1993 and since then as honorary president of the New Democracy party.

In relation to Cyprus, the documents reveal that Mitsotakis told the US diplomat he strongly favoured the Acheson plan, the US plan that aimed to partition Cyprus between Greece and Turkey, and he suggested two things: 1. That the Greek government was predisposed to the plan and that it was only Andreas Papandreou and the influence he had with his father, the then prime minister, Giorgos Papandreou, which was preventing the Greek government from endorsing it; 2. That to overcome the resistance to the plan being expressed by Cyprus' president, Archbishop Makarios, a coup should be organised to overthrow him and the plan imposed on Cyprus by force of arms, presumably Greek and Turkish militaries acting together.

The information regarding Mitsotakis, the Acheson plan and Cyprus is useful for a number of reasons, including: 1. It reveals that the junta's coup against Makarios in July 1974 did not emerge out of thin air, but was the culmination of plots against Cyprus that had been around in Greek political circles for years, i.e the betrayal of Cyprus cannot be laid solely at the door of the junta but at the entire Greek political class, which put foreign interests above those of Greece; 2. The political class that existed in Greece in 1965 is the same one that exists in Greece today, and its thinking is the same: sacrifice Greek national interests for the sake of wider NATO/EU/Western interests and in the name of Greco-Turkish friendship. 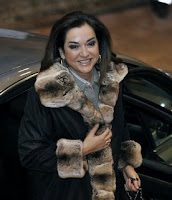 Speaking of Greco-Turkish friendship and proving my point about the survival of Greece's 1965 political class, I didn't know whether to laugh or cry at the following comments made earlier this week to the Greek parliament's select committee on foreign affairs by Greece's foreign minister, Dora Bakoyianni – who is, of course, Mitsotakis' daughter.

According to this article in Cypriot daily Simerini, Bakoyianni told her fellow MPs that: 'We have seen no evidence so far that the Davutoglou dogma [shaped by Turkey's current foreign minister, Ahmet Davutoglu] that espouses Turkey having no problems with its neighbours is being applied to Greece.'

Despite Bakoyianni admitting that Turkey has shown no intention of ending its aggression towards Greece, she insisted that Greece continued to believe in a policy of Greek-Turkish friendship, which according to her is: 'a rational and well-considered choice, based on the fact that Greece and Turkey have to coexist harmoniously. We mustn't stop talking. Conflict hurts Greece first and foremost. Greece and Turkey won't all of a sudden become best friends, but we must build together through trust, and learning from history, a peaceful future, avoiding the mistakes of the past.'
Posted by John K. at Tuesday, July 11, 2017