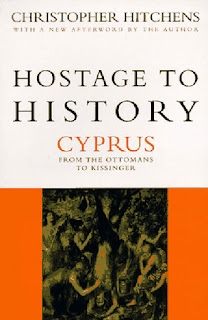 In the Introduction to his Cyprus: Hostage to History, Christopher Hitchens describes what characterised Turkey’s invasion of Cyprus in 1974, which was the desire to carve out a piece of Cyprus devoid of its majority Greek population and any sign of its enduring civilisational presence. Such a dramatic change in the demography and culture of the island could only be achieved by overwhelming violence – murder, deportation, rape, pillage, colonisation. Later, in the Yugoslav wars this process became known as ethnic cleansing and its depredations –  reminiscent of what Turkey did in Cyprus – was perhaps why Hitchens was such a determined opponent of the practices of Serbian and Croatian nationalism at the time.

The struggle of man against power is the struggle of memory against forgetting (Milan Kundera).
There is a sense in which all of us are prisoners of knowledge. Most people who think at all about the island of Cyprus will rely on two well-imprinted ideas of it. The first is that of an insular paradise; the birthplace of Aphrodite; the perfect beaches and mountains; the olive groves; the gentle people and the wine-dark sea. The second is that of a ‘problem’ too long on the international agenda; of an issue somehow incorrigible and insoluble but capable of indefinite relegation. In some accounts, the quaintness and the antiquity of the first impress­ion reinforce the intractability of the second. Cyprus becomes a curiosity – melancholy perhaps, but tolerable to outsiders and lacking in urgency. Meanwhile, there is still the vineyard and the siesta; the cool interiors and the village raconteur to delight and distract the visitor. The Victorian Bishop Heber, writing of another island, gave us the fatuous stock phrase, ‘Where every prospect pleases and only man is vile.’ In Cyprus, this duality was expressed most vividly by Lawrence Durrell in his beautiful but patronizing memoir Bitter Lemons.
In a fashion, I envy those who can continue to see Cyprus in this way. But I am the captive of a certain limited knowledge of the place. The eastern Mediterranean affords few better evenings than the one provided by the dusk in Nicosia, the capital. The Pentadactylos mountains, so named for the five-knuckled and fist-like peak which distinguishes the range, turn from a deep purple to a stark black outline against the sun. To the newcomer, the sight is a stirring one. But to many of my friends, the mountains at that hour take on the look of a high and forbidding wall. Beyond the peaks are their old homes and villages, and the charm of the sunset is dissolved into an impression of claustrophobia.

By day, if one takes the promenade down the busiest shopping street in town, there comes a point where the advertisements, the bars and the inducements simply run out. There is no point, for most people, in proceeding further. They retrace their steps, and find another turning with more promise. But if you walk the extra few hundred yards, you find yourself in one of the modern world’s political slums. A tangle of barbed wire, a zariba of cement-filled oil drums, a row of charred and abandoned shops and houses. Only the weeds and nettles justify the designation ‘Green Line’. This line, which in many places follows the old Venetian wall enclosing Nicosia, marks the furthest point of the Turkish advance in 1974. Soldiers in fatigues warn against the taking of photographs. The red crescent flag of Turkey confronts the blue and white of Greece and the green, yellow and white of Cyprus. Late at night, leaving a taverna, you can hear the Turkish soldiers shouting their bravado across the line. It is usually bluff, but nobody who remembers their arrival will ever quite learn to laugh it off. Continue to walk along the line, in daylight, and there are reminders at every turn. Here, almost concealed behind the Archbishopric, is the Museum of National Struggle. Entering, one finds the memorabilia of a five-year guerrilla war against the British crown – symbolized most acutely by the replica gallows and gibbet that made the United Kingdom famous in so many of her former possessions. A few streets away, on the road back to the city centre and so low down on the wall that you miss it if you are not looking, is set the memorial to Doros Loizou, one of the many Greek Cypriots murdered by the Greek junta in its effort to annex the island in 1974. Proceed in the same direction and you come eventually to the Ledra Palace Hotel, once counted among the most spacious and graceful in the Levant. Its battered but still splendid shape now houses the soldiers of the United Nations: Swedes, Quebecois, Finns, Austrians. A parched no man’s land, perhaps half a mile wide at this point, separates the two barricades. No Cypriot, Greek or Turkish, may cross this line. The Venetian wall bulges outwards near this spot and the Turkish flag, complete with armed Turkish guard, commands the roundabout where the national telephone exchange sits, and the road where the National Museum and the National Theatre lie. Drivers and pedestrians seem never to look up at the only Turks they are allowed to see. A desolate Armenian cemetery and a burned-out bookshop complete the picture. But all of these details, smudges on the Cypriot panorama, require a slight detour which nobody much cares to make. The roads which lead to them do not lead anywhere else. You do not have to see them, but I always do.