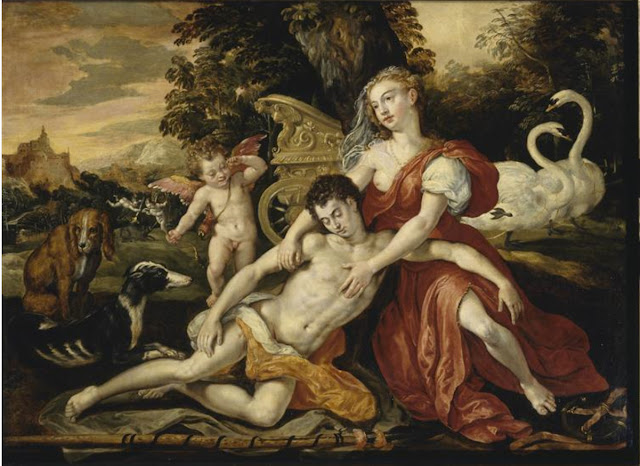 Below is an another extract from Dr Martin Luther King’s essay The Influence of the Mystery Religions on Christianity, this time making links between the death, descent into Hades and resurrection of the god Adonis with the fate of Jesus Christ.

'Another popular religion which influenced the thought of early Christians was the worship of Adonis. As is commonly known Antioch was one of the earliest seats of Christianity. It was in this city that there was celebrated each year the death and resurrection of the god Adonis. This faith had always exerted its influence on Jewish thought, so much so that the prophet Ezekiel found it necessary to scold the women of Jerusalem for weeping for the dead Tammuz (Adonis) at the very gate of the temple. When we come to Christian thought the influence seems even greater, for even the place at Bethlehem selected by the early Christians as the scene of the birth of Jesus was none other than an early shrine of this pagan god – a fact that led many to confuse Adonis with Jesus Christ.

'It was believed that this god suffered a cruel death, after which he descended into hell, rose again, and then ascended into Heaven. Each following {year} there was a great festival in commemoration of his resurrection, and the very words, "The Lord is risen," were probably used. The festival ended with the celebration of his ascension in the sight of his worshippers. Needless to say that this story of the death and resurrection of Adonis is quite similar to the Christian story of the death and resurrection of Christ. This coincidence had led many critics to suppose that the story of the burial and resurrection of Jesus is simply a myth borrowed from this pagan religion. Whether these critics are right in their interpretation or not still remains a moot question.

'However, when we come to the idea of Jesus' decent into hell it seems that we have a direct borrow from the Adonis religion, and in fact from other religions also. Both the Apostles Creed and the Athanasian {Creed} say that between the Friday night and Sunday morning Jesus was in Hades. Now this idea has no scriptural foundation except in those difficult passages in the First Epistle of Peter, which many scholars have designated as the most ambiguous passages of the New Testament. In fact the idea did not appear in the church as a tenet of Christianity until late in the Fourth Century. Such facts led almost inevitably to the view that this idea had a pagan origin, since it appears not only in the legend of Adonis, but also in those of Herakles, Dionyses, Orpheus, Osiris, Hermes, Balder, and other deities.'
Posted by John K. at Wednesday, April 15, 2020