Isaac Asimov on the Spartans 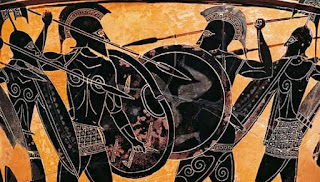 Sparta was the dominant land power in Greece for two centuries, not that Isaac Asimov, in The Greeks: A Great Adventure, thought much of the Lacedaemonians:

‘In later years, the Greeks of other city-states sometimes admired the Spartan way of life because it seemed so virtuous and seemed to lead Sparta to such military glory. However, they were wrong to do so. In art, literature, music, love of life, all that makes it worthwhile to be on the earth, Sparta contributed nothing. She had only a cruel, inhuman way of life to offer, dependent on a brutal slavery of most of her population, with only a kind of blind animal courage as a virtue and her way of life soon became more show than substance. It was her reputation that saved her for a while when her core was rotten. She seemed strong as long as she won victories but whereas other states could withstand defeats and rise again, Sparta lost her domination of Greece after a single defeat. The loss of one major battle [at Leuctra, 371 BC] was to expose her and dispose of her.’