Kissinger against the Greeks… except Karamanlis 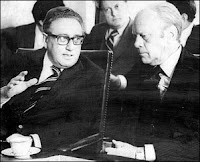 Below is another excerpt from confidential conversations now available in the archives of President Gerald Ford. (See also my previous post). This time the conversation is from 20 February 1975 and involves Ford, his secretary of state Henry Kissinger and other members of Ford's national security team briefing Congressional leaders on, among other things, recent developments in the Middle East, relations with the Soviet Union, the state of Greece and the Cyprus issue following the Turkish invasion of the island. In relation to Greece and Cyprus, Kissinger is particularly anxious that: prime minister Konstantinos Karamanlis – who Kissinger describes as 'a great leader' who 'wants to put Cyprus behind him' – is supported as a bulwark against the left in Greece and Makarios in Cyprus – who Kissinger describes as an agent of 'chaos'; and that the arms embargo imposed by Congress on Turkey after the invasion of Cyprus is lifted, otherwise, according to Kissinger, Turkey will be driven into the arms of radical Middle Eastern states and Israel's security jeopardised, something he thinks should be stressed to the Jewish-American lobby, which could then be used to counter Greek arguments in Congress for cutting aid to Turkey. Read the whole document here.

Kissinger: Makarios is the only party who is interested in continued chaos. Cyprus is a millstone to the Greeks…

Scott: What will the Turks do?

Kissinger: They will sever, step-by-step, their contact with us, and get more active in Middle East affairs. They will soon be running out of spare parts.

Kissinger: He is a great leader. He is flanked by [Andreas] Papandreou and Makarios. He wants a settlement but has to watch his flanks…

Kissinger: Yes. We have installations there which are irreplaceable. And if there is another Israeli-Syrian war and the Soviet Union behaves more intransigently, a hostile Turkey would be very dangerous. The Clerides-Denktash talks are now suspended. Even if we reversed the situation today, it would take time. The chief loser is Karamanlis, who wants to put it behind him, to build Greek democracy. He doesn't want Cyprus to be an issue in Greek domestic politics.

Rhodes: What is [Archbishop of North America] Iakovos' role? He just gave an anti-American speech. I think they are under Makarios.

Scott: It looks to me like the Jewish interests are being imperiled by Greek interests.

Kissinger: No question about it.

Cederberg: Papandreou is the problem. He is not for Karamanlis. He wants to get back in Greece.

Kissinger: You are absolutely right. Papandreou and Makarios profit by chaos. There is now coup talk in Greece.

Byrd: Can the Jewish community help?

Kissinger: My impression is that [Congressman Ben] Rosenthal is trapped. He recognizes his problem but he doesn't know how to get off it.

Burton: Ben just has to be convinced on the merits…

Byrd: I think it is time that the Jewish community became visible in this.
Posted by John K. at Sunday, July 30, 2017