How Karamanlis' 'moderation' did for Cyprus 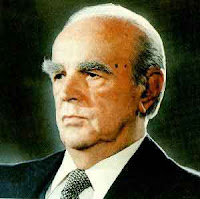 I was reading on the Ινφογνώμων Πολιτικά website, this confidential conversation that took place on 29 May 1975 between Greece's then prime minister Konstantinos Karamanlis and US president Gerald Ford and his secretary of state Henry Kissinger. The conversation took place at the US embassy in Brussels and was dug up by the Washington-based Cypriot journalist Michalis Ignatiou. Among other things, the conversation deals with the restoration of democracy in Greece and Greek-Turkish relations in the light of the Turkish invasion of Cyprus and Turkish aggression in the Aegean. It is deeply embarrassing to read the egomaniacal Karamanlis praise himself for his role in establishing democracy in Greece after the fall of the junta, explain away his surrender of Cyprus and then plead – like the flunky he was – with the Americans to restrain the Turks, jubilant with their victory in Cyprus and now threatening Greece on all fronts. You can almost hear Ford and Kissinger laughing inside at Karamanlis' bizarre display of vainglory and sycophancy.

Anyway, below is an excerpt of the conversation that I've translated from Ignatiou's Greek translation back into English. The original English transcript of the conversation was available in the Ford archives, but for 'national security' reasons was withdrawn in 2004. In the extract, Karamanlis describes the events, as he experienced them, as they unfolded in Cyprus the previous year. It is a staggering statement of narcissism, cowardice and misjudgement dressed up as 'moderation'. As well as Karamanlis' statement being interesting from a historical point of view, it's also noteworthy because it reeks of the impotence and fear that continues to inform contemporary Greek responses to Turkish aggression. Karamanlis is, of course, bewilderingly and tellingly, something of a revered figure among conservatives in Greece.

Karamanlis [addressing Ford and Kissinger]: Permit me to begin by speaking about recent history. Before I returned to power, there was the junta's coup in Cyprus. Makarios was overthrown. The Turks argued that they acted [in Cyprus] as a guarantor power, something that granted them, they said, the right to restore the legitimate government and protect the Turkish Cypriot population. Their guarantor status explicitly refers to any action being aimed at the restoration of legitimacy in Cyprus and the upholding of the island's territorial integrity. Legality was restored three days after the invasion [23 July]. I returned [from exile in Paris] and took over the government of Greece and Clerides did the same in Cyprus. Turkey had fulfilled its aims as a guarantor. But they are still there. A few weeks after [legality in Greece and Cyprus were restored], Turkey seized 40% of the island.

I remember those days very well, because your secretary of state [i.e. Kissinger] woke me at four in the morning. There was no justification for the second Turkish invasion. No one comes up with strategic plans overnight. Turkey's military operation must have been in the planning for a long time. The occupation of 40% of the island occurred on the basis of a military plan with the codename ATTILA. This indicates premeditation. This move [the second phase of the invasion] created 250,000 refugees. You might say that this is not a large amount; but the population of the island is only half a million. Also, the 40% they seized is the most prosperous and productive part of the island.

On 14 August [the start of the second phase of the invasion], I encountered uproar in the army and among the Greek people. I went to the headquarters of the armed forces and they demanded action. There was pressure for a declaration of war. It was natural that everyone should feel they'd been made fools of. But I decided to choose the path of unpopularity, to tell the people to stay calm and to trust me. I told them we would receive help from our friends to find a solution.

In that dramatic moment, I had three choices. First, to go to war. Second, to resign and again withdraw from political life; and, third, to withdraw [Greece] from the military wing of NATO. I went for the third choice, which I considered to be the least painful and damaging. That is the history of Cyprus. It is difficult to prove something that is self-evident, but the Turks made a mistake. The Greeks showed moderation, despite all that happened to them. They are still showing moderation.
Posted by John K. at Thursday, July 27, 2017