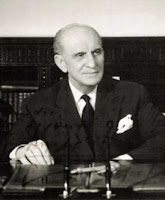 'Cyprus lies at heart of the tragic political developments that have led to the death of democracy in Greece.' (Andreas Papandreou)

Hopefully, by now, we all understand how certain Greek politicians and military leaders for the sake of their own careers, enslaved by their own petty paranoias and even pettier visions of what Greece should be, sacrificed Cyprus, like Iphigenia at Aulis.

They did this by seeking to impose partition on Cyprus, which was not in the national interests of Greece or Hellenism, but would have satisfied Turkey, Britain and America – America having devised, through the Acheson plan, the details of how this partition would come about.

Because Cypriots were naturally horrified by the prospect of their country being partitioned, American foreign policy looked to 'friendly circles' in Greece to persuade the Cypriots, one way or the other, to accept the dismemberment of the island.

It is at this point that this article by Victor Netas takes up the story and relates it to the palace coup that overthrew the Centre Union government of prime minister Giorgios Papandreou on 15 July 1965 and set in motion the events that led to the junta seizing power in 1967 and the Turkish invasion of Cyprus in 1974.

Netas claims that the constitutional coup that overthrew the Centre Union government is directly linked to a visit to Washington Papandreou made in June 1964 and his refusal to succumb to the pressure exerted on him by US President Lyndon Johnson to accept the Acheson plan, which not only envisaged the partitioning of Cyprus between Greece and Turkey but also the ceding of Kastellorizo to Turkey.

Coming out of his ill-tempered meeting with Johnson, Papandreou confided to colleagues: 'We're finished. Great powers don't forgive such things.'

After Papandreou left America, Johnson called in Greece's ambassador to Washington, Alexandros Matsas, and insisted that Greece accept the Acheson plan. Matsas said that 'no Greek parliament would never accept such a plan' and that 'the Greek constitution does not permit for any Greek government to hand over a Greek island'.

Then came the following exchange:

Johnson: Then listen to me, Mr Ambassador. Fuck your parliament and fuck your constitution. America is an elephant. Cyprus is a flea. And Greece is a flea. If these two fleas continue itching the elephant, they may just get whacked by the elephant's trunk, whacked good…

Johnson: I'll tell you what response I'll give if I get back such a reply from your prime minister. Who does he think he is? I can't have a second De Gaulle on my plate. We pay a lot of good American dollars to the Greeks, Mr. Ambassador. If your prime minister gives me talk about democracy, parliament and constitutions, he, his parliament and his constitution may not last very long.

Netas says that President Johnson's threats and Giorgios Papandreou's fear that he would be overthrown were realised when, the following year, the palace, with the support of Centre Union defectors [the so-called 'apostates' – see my post on the role of the leading 'apostate' Konstantinos Mitsotakis], dismissed his government and installed a pro-palace administration, which would also be more deferential to American demands.

Netas goes on to suggest that America, at this time, far from acting as a restraining influence on Turkey – as Christopher Hitchens suggests America was doing, in his book, Cyprus: Hostage to History – was in fact actively encouraging the Turks to invade Cyprus to impose partition and that what was really stopping Turkey was its military unpreparedness.

Netas quotes Nihat Erim, in charge of Turkey's Cyprus policy since the 1950s, who writes in his book, Cyprus, that on 8 February 1964: 'The American journalist Lawrence Moore… visited my home and left me a book on Cyprus and a letter, in which he suggested that it is only fair and just that a Turkish Cypriot state should be created in Cyprus… [while on] 22 February 1964 I left for New York [to take part in the UN debate on Cyprus]. The Security Council's Resolution of 4 March was a victory for Turkey. At the same time, it became known at the UN that the Turkish government had decided to invade Cyprus if Makarios did not comply [with the UNSC resolution]. On 11 March, [Turkey's prime minister] Ismet Inonu called me in, and asked for my impressions from America. I told him: 'America is on our side, but doesn't wish to see a war with Greece. America is thinking of NATO. But America is open to persuasion'… Inonu replied: 'We are not in a position to send our army to Cyprus. We discuss it with our generals three times a day.'

Netas goes on to suggest that during the period of the 'apostasy' that brought down Papandreou, 'many strange things occurred', and refers to an article in the Turkish daily Milliyet on 27 January 1976 – Some confidential recollections on Turkish-Greek relations – in which Suat Hayri Urguplu, who served as Turkey's ambassador to Washington and his country's prime minister in 1965, claims that senior Greek officials, to the astonishment of the Turkish government, had suggested that the two countries 'settle their differences like Ataturk and Venizelos. The Greeks offered us 2-3 nearby islands and suggested that the Ecumenical Patriarchy and Halki Theological School, which have remained in Turkey without meaning and wound our national sensitivities, be transferred to Greece.'

Netas wonders who exactly made the offer to Turkey. It couldn't have come from the Papandreou government, and must have been made, he suggests, by 'apostate' circles who formed the pro-American administration installed with the collusion of the palace.

NOTE: Netas doesn't make clear what these 'senior Greek officials' were asking in return for the ceding of 2-3 Greek islands and the transfer of the patriarchate; presumably, for such significant 'concessions', the union of all of Cyprus with Greece.
Posted by John K. at Monday, September 28, 2020