The Fourth Crusade and the sack of Constantinople 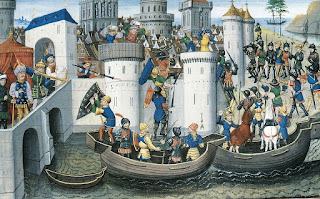 This is how Steven Runciman, in volume three of his A History of the Crusades, describes the Latin fourth Crusaders’ sack of Constantinople, which went on for three days after the City’s capture on 13 April 1204:

‘The sack of Constantinople is unparalleled in history. For nine centuries the great city had been the capital of Christian civilisation. It was filled with works of art that had survived from ancient Greece and with the masterpieces of its own exquisite craftsmen. The Venetians indeed knew the value of such things. Wherever they could they seized treasures and carried them off to adorn the squares and churches and palaces of their town. But the Frenchmen and Flemings were filled with a lust for destruction. They rushed in a howling mob down the streets and through the houses, snatching up everything that glittered and destroying whatever they could not carry, pausing only to murder or to rape, or to break open the wine cellars for their refreshment. Neither monasteries nor churches nor libraries were spared. In St Sophia itself drunken soldiers could be seen tearing down the silken hangings and pulling the great silver iconostasis to pieces, while sacred books and icons were trampled under foot. While they drank merrily from the altar-vessels a prostitute set herself on the Patriarch's throne and began to sing a ribald French song. Nuns were ravished in their convents. Palaces and hovels alike were entered and wrecked. Wounded women and children lay dying in the streets. For three days the ghastly scenes of pillage and bloodshed continued, till the huge and beautiful city was a shambles.’