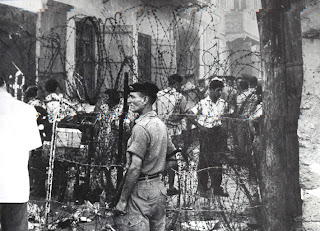 Here’s the final part in the series I’ve been publishing on Turkish political actions in Cyprus in the period leading up to the island’s independence in 1960 as described in Stella Soulioti’s Fettered Independence: Cyprus 1878-1964. To reiterate, what we’ve established is that around 1956 Turkey abandoned its policy of demanding annexation of all of Cyprus in the event of an end to British sovereignty in favour of a policy of partition, with one half of the island going to Turkey and the other half to Greece. For this policy of partition to succeed it had to prove, through the stirring up of ethnic conflict, that Greek and Turkish Cypriots could not live together and had to be separated into their own areas. From the beginning, Turkey drew up a map that carved Cyprus in two along the 35th Parallel and agitated for a ‘population exchange’ in which Greeks living in the area Turkey had set its sights on would be expelled and replaced by Turkish Cypriots (encouraged to leave from what would become the Greek area of Cyprus) and settlers dispatched from Turkey. This was the plan Turkey and Turkish Cypriot nationalists on the island sought to implement during the final years of British colonial rule; continued to pursue after independence; and was the imperative behind Turkey’s invasion of Cyprus in 1974.

Thus, in her concluding remarks, Soulioti makes clear that it was Turkey’s long-term policy of partition that brought intercommunal turmoil to Cyprus – indeed, the policy of partition was predicated on ethnic cleansing; how else could Greeks, who predominated by 4-1 in the areas of Cyprus Turkey aspired to annex, be made to abandon their towns and villages other than through violent expulsion? – and explains Turkey’s actions and motives in 1974.

For the other posts in this series, go here.

It may be too simplistic to ascribe them solely to the pursuit of the objective of partition on the instigation of political leaders. The possibility that other elements, such as the following, played a part must not be overlooked: (1) the lower standard of living of the Turkish Cypriots; (2) the sense of segregation fostered by the fact that they were congregated in separate quarters in the various towns, which also made forays easier; and (3) the fear that enosis might soon become more than an unattainable Greek dream, creating uncertainty and anxiety as to their future.

The above factors may indeed have contributed to the events of that period. However, the intensity of the Turkish Cypriot assaults, their careful preparation and the statements and admissions of their leaders negate the possibility that the attacks were spontaneous eruptions of indignation at the sporadic, isolated killing by EOKA of a Turkish Cypriot serving with the British security forces.

The inevitable conclusion is that these attacks would not have occurred without incitement and direction from Turkey, to mark the initiation by Ankara of a more aggressive policy on the Cyprus Question. Moreover, the patterns adopted were those used during the anti-Greek pogroms in Istanbul and Izmir in September 1955. It is unfortunate that Ankara’s endorsement of violence and the supply of arms to the Turkish Cypriots did not  cease on the conclusion of the Zurich-London agreements in February 1959 but continued after the signing of those agreements, until the achievement of the final goal by the Turkish invasion of Cyprus in 1974.

Lasting effects of Turkish Cypriot violence against the Greek Cypriots in 1956-58
The events of 1956-1958 left far deeper and more lasting scars than could have been anticipated. So much distorted publicity has been given by the Turks in later years to the events of 1963-1964, and so much more successful propaganda made out of them, that public opinion has been blinded to the fact that intercommunal strife in Cyprus was initiated as early as 1956 by the Turks themselves, not by Greeks, and that in 1963-1964 the Turks were not – as they have tried to convince the world – merely passive victims of Greek Cypriot violence, but protagonists in the continued pursuit of the Turkish  objective of partition.

In assessing the psychological climate within the Greek Cypriot community in 1963-64, the following factors (emanating from the events of 1956-58 coupled with the divisive and unworkable elements of the 1960 constitution) must be taken into account:

•    the enduring fear struck in the hearts of the Greek Cypriots by the 1956-1958 Turkish attacks;
•    the feeling of helplessness and humiliation caused by the fact that one-fifth of the population had succeeded in terrorizing four-fifths;
•    the loss of life, destruction of property and ousting of hundreds of Greek Cypriots from their homes in Nicosia; and
•    the realization that the Turkish Cypriots had emerged from the Zurich-London agreements with a manifestly unjust and disproportionate share, which they were quick to exploit to their even greater advantage.

It is important as a matter of historical truth that these facts be remembered.