Political Activities of Turkey and the Turkish Cypriots, 1945-58: (Part One) 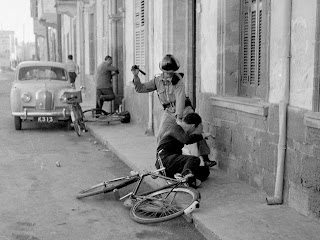 I wrote previously that I was going to produce a series of posts on how in the latter stages of British colonial rule in Cyprus (and the first years of independence), Turkish aims on the island – which came to be characterised by a demand for taksim, or partition of Cyprus, with one part of the island going to Turkey and the other to Greece – were predicated on the stirring up of enmity between Greek and Turkish Cypriots and the violent uprooting of Greek Cypriots from those areas of the island Turkey envisaged annexing. I also said I would draw on Stella Soulioti’s Fettered Independence: Cyprus, 1878-1964 to illustrate the precise nature of Turkish Cypriot political action and thinking during this period. So what I’m going to do is publish, over several posts, the relevant chapter on Turkish Cypriot political activities from Soulioti’s book; a book, by the way, which I strongly recommend to any serious student of the Cyprus Problem, and which I managed to pick up from here for little more than £5. Stella Soulioti (1920-2012), it should be stressed, had a long and distinguished political career in Cyprus from the EOKA period and onwards. She served in several post-independence administrations and was justice minister from 1960-1970. Her knowledge and experience of the events she describes in her book are often first hand.

Turkish Cypriot Organizations and Involvement of Turkey
The first Turkish Cypriot organization was formed in 1943 under the name the Cyprus Turkish Minority Association (KATAK), which was joined by Dr Fazil Kutchuk, the Turkish Cypriot leader who later became vice-president of the Republic of Cyprus. The activities of the association were rather insignificant, and in 1945 Kutchuk withdrew from it and established the Cyprus Turkish National Party. This gradually superseded KATAK, which was finally dissolved in 1949.

Although the general objective of these organizations was to oppose enosis and support the continuation of British colonial rule, it should not be overlooked that in January 1947 KATAK issued a statement advocating that if Britain were to leave Cyprus, the island should go back to Turkey, ‘its previous suzerain and nearest neighbour’. However, when a Committee on Turkish Cypriot Affairs was set up by [colonial governor of Cyprus] Lord Winster to inquire into the grievances of the Turkish Cypriots, the chairman declared at its opening meeting on 24 June 1948 that it was the ardent desire of the Turks on the island to live and prosper under British rule, which they wished to see perpetuated. Significantly, the young generation was represented on the committee by Rauf Denktash, who was later to become the forceful leader of the Turkish Cypriot community.

It was in 1948, after the collapse of the Consultative Assembly, that the Turkish Cypriots first appealed to Turkey for support. This approach met with a positive response, particularly among university students and the press. In November 1948, President Inonu assured a Turkish Cypriot delegation that Turkey was not indifferent to the future of Cyprus. Before the end of that year, a large anti-Greek rally staged by the Turkish community took place in Nicosia. This heralded the beginning of Turkish Cypriot orientation toward Turkey.

It is indicative of the trend of events that in 1955 the name of the Cyprus Turkish National Party was changed to the Cyprus-is-Turkish Party. This party was in fact organized with the help of an emissary from Turkey, Hikmet Bil. At the same time, a sister party was formed in Turkey itself, which Kutchuk is quoted as saying ‘would soon have half a million members, all ready to back up their brothers in Cyprus’ – and that all was done with the approval of the Turkish government. Hikmet Bil was president of the Cyprus-is-Turkish Association in Turkey, while Adnan Menderes, the prime minister, was its patron.

In the summer of 1955, the Turks also formed an underground organization, Volkan, which was later reorganized and renamed the TMT (Turk Mukavemet Teshkilati, Turkish Resistance Organization). Many members of Volkan and TMT were Turkish Cypriot auxiliary policemen. It has since become known that the organizer of TMT was Rauf Denktash. In an article in the Turkish newspaper Belge, Denktash later related that in 1958 he visited Ankara with Kutchuk and had a meeting with foreign minister Zorlu to discuss the better organization of TMT on an island-wide basis. On a subsequent visit to Ankara, he met Cevdet Sunay, who was to take a personal interest in TMT in his various capacities, as deputy chief of staff, chief of staff and later president of Turkey. ‘They gave us their most distinguished experts in order to organise the TMT in the best possible manner,’ Denktash said.

It is a fact worth special attention that, unlike EOKA [which was entirely rooted in the Greek Cypriot community], TMT was not a wholly Turkish Cypriot movement but overtly involved Turks from Turkey, and that it operated both in Cyprus and Turkey. This was formally recognized by the decision of the Turkish Cypriot Legislative Assembly, taken on 7 February 1975, to grant ‘Turkish Cypriot citizenship’ to ‘persons who served in the Turkish Resistance Organization, TMT, since 1958, in Cyprus and in Turkey’.

British Attitude towards Turkish Activities
British policy was to encourage the underground activities of the Turks and to rally Turkish Cypriot support in opposition to EOKA. It is eloquent of this policy that, while EOKA was banned a week after the appearance of [its] first leaflet and mere membership of EOKA was decreed a crime, no action was taken against Volkan or TMT, nor did the government voice any objection to the meddling of Hikmet Bil, a foreign national, in the affairs of a British colony. Worse still, Turkish Cypriots were employed extensively in the British security forces against EOKA. These consisted of a Mobile Reserve, composed exclusively of Cypriot Turks, and an Auxiliary Police and Special Constabulary which, in their overwhelming majority, were made up of Turkish Cypriots (1,700 out of 1,770), in addition to the large numbers serving in the regular police force. It has been noted that ‘as guards and escorts they [the Turks] were irreplaceable,’ and that ‘the co-operation of the Turkish community was vital to the struggle against EOKA’. It was only a matter of time before an incident would occur involving a Turkish Cypriot serving with the security forces, thereby activating riots against the Greek Cypriots.

Read Part Two in the series, The Policy of Partition, here.