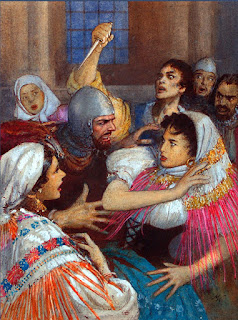 Canto Classics has recently reprinted Steven Runciman’s The Sicilian Vespers, which expertly guides us through the murky world of 13th century European high politics, its twists and turns, sudden shifts in fortune, alliance, tactics and strategy; and compellingly depicts the brigand-dynasts of the West vying for each other’s thrones and fiefdoms, conspiring, plotting and murdering their way in vain pursuit of power and wealth.

A tumultuous period crescendoed in Sicily at Easter Vespers, 1282, when the local population – as the spearhead of a conspiracy organised by the Byzantine emperor Michael Palaiologos and drawing in King Peter of Aragon and disgruntled supporters of the erstwhile king of Sicily Manfred Hohenstaufen – rose up against the loathed French dynast Charles of Anjou, massacred 8,000 French colonists and liberated the island from his regime.

Central to the history of the Sicilian Vespers is the fate of the Byzantine Empire and the efforts of its emperor, Michael Palaiologos, to consolidate his hold of Constantinople, which he had, in 1261, taken back for the Greeks after 57 years of Latin rule.

The Palaiologan re-conquest was met with shock and dismay in the West, and the ousted Baldwin was sympathetically received in various courts and particularly by the pope and Manfred Hohenstaufen, the king of Sicily, who both vowed to help him recover his throne in Constantinople.

However, for Baldwin’s hopes to be realised there would have to be a reconciliation between the papacy and Manfred. Because even if Manfred believed that nothing would be more pleasing to the papacy than if he were to help restore the Latin Empire of Constantinople and bring to heel the schismatic Greeks; for the papacy, the Hohenstaufens remained German usurpers who had illegitimately wrested Sicily and southern Italy from papal control and were now threatening to create an Italo-German empire that would diminish the papacy’s political role on the continent even further.

Thus, increasingly tormented by the gains of Manfred in central and northern Italy, successive popes scoured Europe in search of a potentate who would end the Hohenstaufen dynasty in Sicily.

After courtship of various English royals had floundered, in 1263 the Sicilian throne was offerred by Pope Urban to Charles of Anjou, the ambitious and underemployed brother of the French king. In June 1265, Pope Clement had Charles anointed king of Sicily, and within a year, Angevin and French forces had invaded Italy and, at the Battle of Benevento, succeeded in killing Manfred, routing his troops and paving the way for Charles to take full possession of his kingdom.

For the Greeks, Charles’ accession to the throne of Sicily significantly increased the danger to Constantinople. Not only had Charles inherited Manfred’s desire to see the Latin Empire in Constantinople restored – with Charles able to extract from the ‘exiled’ Baldwin far more generous terms on how to divide Greek spoils in the event of Charles’ armies expediting restoration; but also, with the Hohenstaufen issue settled to the papacy’s satisfaction, there was now nothing to stop the pope from pursuing his enmity towards the Byzantines.

Michael’s response to the threat from Charles was twofold.

First, to appease the papacy, Michael agreed, at the Council of Lyons in 1274, to the Union of the Churches. By doing so, Michael expected the pope to act as a restraining influence on Charles, which would free the Byzantines to deal with rival Greek kingdoms; hostile Serbs and Bulgarians in the Balkans; and Turks in Anatolia and Asia Minor, where Michael was lobbying the pope to organise a Crusade.

However, it was one thing for Michael to put his name to a document accepting subordination of the Greek church to Rome, but another convincing the clergy and ordinary Greeks to accept the West’s terms, meaning that Michael, to stave off the restless Charles, was having to continuously placate increasingly skeptical papal delegates that he was doing all he could to implement the agreement on church union.

For the Westerners, it was becoming clear that, despite Michael’s reassurances, the Greeks were ‘unflinchingly’ opposed to church union and that Michael could do little to quell the dissent and riots over the issue. Indeed, either to test Michael’s commitment to the terms of union or, as Runciman says, because the pope was ‘deliberately trying to wreck the union’, the West’s conditions for unity became increasingly onerous and more humiliating to the Greeks.

In 1281, Pope Nicholas finally declared that the Greeks were not fulfilling the conditions they’d agreed to, that Michael was a ‘heretic and fosterer of heresy’ and that he was to surrender his empire (by 1 May 1282) to the pope or be overthrown. The way was now open for Charles to oust the Greeks from Constantinople, and he immediately began amassing money, troops and a fleet in preparation for the enterprise.

For Michael, with his policy of preserving his empire (by promising church union in exchange for the papacy restraining Charles) now falling apart, it was time to advance the second strand of his strategy, which was to depose Charles before Charles could depose him.

Thus, Michael not only fomented and financed rebellion in Sicily, where locals were bristling under Charles’ repressive rule and where a large Greek-speaking population still (according to Runciman) felt affinity with the Greek emperor in Constantionople; but he also funded and organised Manfred and Hohenstaufen stalwarts out for revenge against Charles; and persuaded King Peter of Aragon, who ruled Western Spain (including Catalonia), to pursue his claim to the Sicilian throne, which was based on Peter’s Norman ancestry (the Normans had ruled Sicily from 1072 to 1194) and the fact that his wife, Constance, was Manfred’s daughter.

With Byzantine gold and diplomatic craft, then, Charles was pre-empted. Before he had the chance to launch his campaign against Byzantium, which was planned for the spring of 1282, Sicily, after initial violence at Easter Vespers on 30 March outside the Church of the Holy Spirit in Palermo, erupted in a wave of anti-Angevin fervour and bloodletting that drove the French from the island. The rebels initially established Communes on the northern Italian model, but papal disapproval and Angevin counterattack soon had the Sicilians turning to King Peter of Aragon for protection, who accepted the island’s throne in September 1282, and from which, with more gold from Constantinople, he was able to dispose of the remnants of Charles’ forces in Calabria.

Michael Palaiologos died in December 1282 feeling, Runciman says, his life’s work complete. He had restored the empire and thwarted a counterattack from the West.

‘Should I dare to claim that I was God’s instrument in bringing freedom to the Sicilians, then I would only be stating the truth’, was Michael’s valedictory boast.

However, in the event, Michael’s triumphs were illusory and the respite for the Byzantine empire short-lived. For it soon became apparent that all the Sicilian Vespers had achieved was to replace a French king with ambitions to create a Mediterranean empire with a Spanish equivalent.

In 1303, Catalan mercenaries, surplus to requirements at the Aragonese courts in Sicily and Spain, offerred their services to Emperor Andronikos II Palaiologos, to aid his wars against the Turks in Anatolia and Asia Minor. The Catalan Company’s initial successes against the Turks only encouraged its avarice and ambitions and the Catalans soon became another threat to Byzantine integrity and legitimacy. In 1305, the Catalans devastated Thrace and Macedonia, including Mt Athos, while in 1311, the company conquered the duchies of Athens and Neopatria, which remained part of the Aragonese crown until 1388-1390, before the Navarrese Company and then the Ottoman Turks intervened, the latter for a more enduring period.

Still, the legacy of the Aragonese interlude in Greece continues, with Spanish kings to this day including ‘Duke of Athens and Neopatria’ among their titles, while, in 2005, the government of Catalonia decided, 700 years after the Aragonese/Catalan invasion and occupation of Greece, to make amends for its ancestors’ pillaging of Mt Athos (on which, all these years, Catalans had been banned from setting foot) by contributing 200,000 euros to restoration works for Vatopedi monastery.