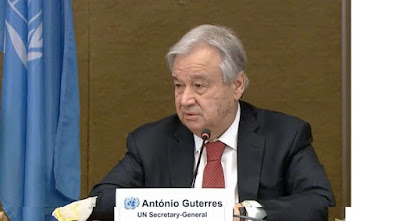 It’s very difficult to comprehend what purpose the UN-led 5+1 talks on Cyprus held in Geneva over the last three days served.

The UN Secretary General Antonio Guterres said he called the meeting involving the leader of the island’s Greek Cypriot community (President Nikos Anastasiades); the island’s Turkish minority leader (Ersin Tartar); and the foreign ministers of Cyprus’s three so-called guarantor powers, i.e. the UK, Greece and Turkey, to see if there was sufficient common ground to justify organising fully-fledged negotiations aimed at finding a solution to the so-called Cyprus problem.
Predictably, the talks broke up without any such agreement. In fact, the two sides were so far apart that Guterres wasn’t even able to issue a bland joint communiqué from the participants about a positive atmosphere, constructive dialogue, shared objectives, etc.
Rather, the Turkish side put forward, as it said it would, its proposal for a so-called ‘two-state’ solution while the Greek Cypriots stuck to the formula of a bizonal, bicommunal federation. This highly unusual form of federation has been stipulated as a Cyprus solution by countless UN resolutions and, for decades, been the agreed parameter for reunifying the island accepted by all involved parties and the international community.
Clearly, then, the Turkish side’s idea for two independent states on the island was not only entirely outside the agreed framework for a solution, it was also a proposal it knew would never find Greek Cypriot acceptance. The Turkish side sought to overcome these uncomfortable truths by, absurdly and presumptuously, demanding from Guterres – as if it was his prerogative and not that of the UN Security Council – that all previous security council resolutions be swept away and a new resolution adopted reflecting their proposition.
It’s worth pointing out that when the Turkish side refers to a two-state solution, it does not mean two wholly independent states on the island. What it means is a confederation of two sovereign entities, which would allow the Turkish Cypriots to have independence in the north while at the same time affording them a controlling say at central government level.
In other words, under the Turkish proposal, the Greek Cypriots would lose any right to effectively govern Cyprus and find themselves subject to a Turkish veto on all matters where the federal government had competence. ‘Independence in the north, partnership in the south’ has been Turkey’s Cyprus policy since 1964. Contrary to common belief, a clean partition of the island is not Turkey’s optimal Cyprus solution since it doesn’t suit its purpose of bringing the whole of Cyprus under its influence.
Despite the abject failure of the Geneva talks, Guterres did say he would call another meeting in two or three months time. Again, it’s hard to see what the purpose of such a meeting will be or what the UN secretary general expects to have changed for the better by the summer.
We note, however, that such a summit will come just after the European Council convenes at the end of June, at which EU-Turkey ties will be discussed and where those in the EU favourable to Turkey are expected to argue for an upgrade in relations, particularly by way of a renewed Customs Union and visa-free travel to the EU for Turkish citizens.
A reasonable conclusion would be that these pointless rounds of Cyprus talks are a useful way for Turkey and the EU to fend off pressure from the Greek and Cypriot governments for Europe not to proceed with a business-as-usual relationship with Turkey, as if Turkey was not engaged in a military occupation of 37% of the territory of an EU member-state. Since talks on the Cyprus issue are ongoing, the EU and Turkey can say, it would be unwise to jeopardise their chances of success by alienating Turkey, pushing it away from the EU, an argument Greece and Cyprus have fallen for, or been pressured into accepting, many times before.
Posted by John K. at Thursday, April 29, 2021