Five myths about the 1974 coup against Makarios 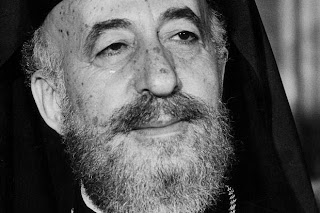 I came across an interesting piece, Cyprus 1974: five myths about the coup, written by Marios Evriviades, who is professor of International Relations at Panteion University. (Read the entire article in Greek here or here).

The five myths, according to Evriviades, are that: 1. Sampson and EOKA B organised the coup; 2. The objective of the coup was enosis; 3. The objective of the coup was partition; 4. Makarios was deliberately allowed by the junta to escape from the assault on the presidential palace; and 5. The Americans tricked junta leader Dimitrios Ioannides into carrying out the coup.

Below I’ve translated into English extracts that relate to the first three myths Evriviades refers to. I believe Evriviades’ repudiation of the first two myths is compelling and even though I agree with the assertion he makes in discussing myth number three that Turkey’s invasion and partitioning of the island in 1974 did not alter Turkey’s deeper geostrategic goal of controlling the whole of Cyprus, I have my doubts about his view as to when Turkey came to regard partition as falling short of its long-term objectives.

Evriviades starts off his piece by referring to a UK Foreign Office document dated 12 September 1956 revealing that, despite Cyprus being in the throes of its campaign for enosis, Greece, through its foreign minister Evangelos Averoff, was actively promoting the idea of partitioning the island. Evriviades’ says:


‘In July 1956, while EOKA’s liberation struggle was fully underway, Evangelos Averoff was pushing the idea to American diplomats that Cyprus should be partitioned. In September 1956, Averoff repeated to Norway’s foreign minister Halvard Lange that partition was the only possible solution to the Cyprus Question. Two weeks later, Averoff suggested partition in two meetings with Turkey’s ambassador in Athens.’

On to the myths:

1. Sampson and EOKA B organised the coup
Evriviadis says that EOKA B was not involved in the coup and that Nikos Sampson [later installed as president] was completely irrelevant to it. The coup was organised from Athens and was carried out by junta officers in Cyprus, using forces from ELDYK [Hellenic Force in Cyprus] and elite units from the Cyprus National Guard.

Sampson, with a number of bodyguards, came out on to the streets of Nicosia on the morning of the coup on 15 July to find out what was going on. He was arrested along with his bodyguards and held in the basement of the headquarters of the National Guard. Only later, when his identity became known, was Sampson taken to the office of the junta’s main henchman in Cyprus, Brigadier Michalis Georgitsis, who had orchestrated the coup. Because no eminent Cypriots – such as Glafkos Clerides – would agree to be sworn in to replace the deposed (but still alive) president, Archbishop Makarios, Sampson was chosen, even if Sampson was regarded as ‘insane’, both by Athens junta leader Dimitrios Ioannides (who became head of EOKA B when General Georgios Grivas died in January 1974) and Ioannides’ EOKA B representative in Cyprus, Lefteris Papadopoulos.

Despite, Ioannides’ anger and disappointment that the ‘insane’ Sampson was the only man that could be found to make president of Cyprus, the two began to co-operate, with Ioannides’ first order to Sampson being: ‘Nicky, bring me Mouskos’ (i.e. Makarios’) head.’(«Νικολάκη, θέλω το κεφάλι του Μούσκου»).

As for EOKA B, by the beginning of July 1974, it was disintegrating, with its entire local leadership in prison. With the coup, its remaining members took the opportunity to kill resisters and other political opponents. Prior to the coup, EOKA B actions sought to foment conditions of civil war among Greek Cypriots, following the strictures and techniques laid down by the Nato-inspired anti-communist Operation Gladio. The Greek version of Gladio was Κόκκινη Προβιά, and this was applied in Cyprus throughout the reign of the Athens junta (1967-1974). The creation of EOKA B in 1971 and its subsequent activities were products of Κόκκινη Προβιά.

2. The objective of the coup was enosis
Not at all.
Unadulterated, real enosis had been abandoned by Athens in 1957, if not 1956. Any discussion of enosis after the events of 1963-64 [i.e. the Turkish Cypriot uprising] referred to ‘double enosis’, i.e. partition or, more correctly, the dissolution of the Republic of Cyprus and the annexation of some 60% of the island by Greece, with the rest going to Turkey.

Any assertion by the junta that its actions in Cyprus were motivated by a desire for enosis is sheer hypocrisy. The aim of the Ioannides junta was more simple: it was the survival of the junta regime – which felt threatened by a free and democratic Cyprus and by Turkey in the Aegean. By removing the ‘Red Priest’ [Makarios] in Cyprus, Ioannides believed he was providing a valuable service to his sponsor, the USA, which loathed Makarios and regarded him as an impediment to their plans for the island. Ioannides hoped that by doing the Americans a favour, Washington would restrain Turkey not only in Cyprus but also in the Aegean, where Turkey had begun to make threatening noises in November 1973.

3. The objective of the coup was partition
Yes and No.
It’s true that both the Georgios Papadopoulos (1967-73) and Dimitrios Ioannides (1973-74) juntas were reconciled to the partition of Cyprus, which when they weren’t calling it ‘double enosis’ were calling it ‘enosis with something in return’. Partition was also the ideal solution and strategic aim of the USA.

However, was partition Turkey’s objective on Cyprus? And was Ankara prepared to work first with the Papadopoulos’ and then the Ioannides’ regimes to bring about the division of Cyprus?

Here we are confronted with another myth, that Turkey’s aim was and continues to be the partitioning of Cyprus. Until August 1964, this was the case, but afterwards, it is not so. In August 1964, Turkey rejected partition as envisaged by the Acheson Plan (Greece had accepted the plan), because partition would not have solved its main strategic preoccupation, which was to prevent Greece extending its sovereignty to Cyprus. From this point on, Turkey altered its Cyprus policy in favour of the dissolution of the Republic of Cyprus and the creation of a federation of two autonomous states on the island [the ‘rulers in the north, partners in the south’ scenario] which would allow geostrategic control of Cyprus to pass to Turkey. Ioannides may have had the aim of partitioning Cyprus, but not Turkey. The form the Turkish invasion of Cyprus took and Turkey’s current Cyprus policy prove this beyond doubt.
Posted by John K. at Sunday, September 20, 2020