Political Activities of Turkey and the Turkish Cypriots, 1945-1958. Part Six: The Geunyeli massacre and the expulsion of Greeks from Omorphita 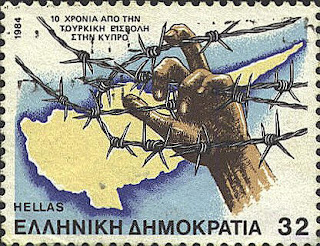 We’ve now established, using Stella Soulioti’s Fettered Independence: Cyprus 1878-1964, that Turkey in 1956 settled on a plan to partition Cyprus and pursued this through a campaign of violence aimed at stirring up ethnic hostility in order to prove that Greek and Turkish Cypriots could not live together and had to be separated politically and geographically. In my previous post, we noted how Turkish Cypriot leader Rauf Denktash admitted that Turkish nationalists on the island engaged in false flag incidents as a means to instigate and justify violence against Greek Cypriots; and we noted how the anti-Greek riots of 7 June 1958 – that began with a false flag incident – represented an escalation of the Turkish tactic of fermenting ethnic disturbances. In this post, we draw attention, in another excerpt from Soulioti, to two of the most notorious acts of violence suffered by Greek Cypriots during the summer of 1958: the Geunyeli massacre and the ousting of Greek Cypriots from the Nicosia suburb of Omorphita.

Just to stress, the rationale behind this series of posts about Turkish Cypriot violence is to counter Turkish propaganda that it was Greek Cypriots who were behind intercommunal violence on the island and, indeed, this was part of an organised campaign to exterminate Turkish Cypriots and facilitate Enosis. In fact, if you go here, you can see a Twitter exchange I had today with Turkey’s ambassador to Yemen, Fazli Corman, who repeats the absurd claim that Greek Cypriots came up with a plan in 1963, the Akritas plan, the aim of which was the ‘eradication’ of Turkish Cypriots.

Read parts one, two, three, four and five in the series.

1. Geunyeli Massacre
The violence reached its climax on 12 June, when thirty-five unarmed Greek Cypriot villagers, including a boy of fourteen, were attacked by Turkish Cypriots in a field near the Turkish Cypriot village of Geunyeli. Eight of them were murdered and mutilated, while another five were seriously wounded. The following are extracts from the findings of the commission of inquiry, appointed by the governor of Cyprus to investigate the incident:

For some days prior to the 12th June, in fact from the 7th June, intercommunal feeling was running very high in the island and there had been many instances of attacks by Turks, particularly in Nicosia, upon members of the Greek community and upon Greek property.

He [Lieut. Baring, Cornet, Royal Horse Guards, one of the first to arrive on the scene] came upon the body of a man he took to be dead – ‘He was cut everywhere and you could not find a piece of flesh that was not.’

It is a fact that this party of thirty-five unarmed Greeks walked into an ambush laid by Turks who had concealed themselves and went into the attack when the [Turkish] motor-cyclists started shooting. As a result four Greeks died on the spot and four died later in hospital; five were severely wounded but survived. The attack was of a most savage nature and the injuries inflicted indicate an extraordinary blood lust.

There is every indication that it was not a haphazard affair, but was arranged in anticipation of these Greeks passing along by where the killers were concealed.

During the summer of 1958, Turkish Cypriots drove out seven hundred Greek Cypriots from 170 houses in Omorphita, a mixed suburb of Nicosia, and Turkish flags were placed on them. This was the first instance in which the Turkish policy of separating the two communities and creating territorial division was applied in practice and it became a symbol of the ‘Turkish takeover movement going on all over the island’. As Omorphita was contiguous to the Turkish quarter of Nicosia, Turkish Cypriots from villages in other parts of the island were encouraged to move into the unoccupied houses of the Greek Cypriots, thus expanding the sector of the capital inhabited exclusively by Turkish Cypriots. The Omorphita incident was described as follows [by Nancy Crawshaw in The Cyprus Revolt]:

On 30 June serious clashes broke out between Greeks and Turks at Omorphita, a new suburb on the outskirts of Nicosia. Troops quelled the initial outbreak. But the suburb, with its neighbour Kaimakli, continued to be the centre of intermittent communal friction for many weeks. The sight of a Turkish youth brandishing a knife over the garden wall was sufficient to set off a new wave of panic. Early in July Greek householders were still leaving Omorphita in considerable numbers by lorry. The Turks, convinced that military help from Turkey was imminent and partition a certainty, became very bold. Many of them moved into Greek houses and hoisted the Turkish flag. Troops at the time blamed the authorities for their delay in authorising the curfew. The security forces were now faced with the problem of a head-on clash with the Turks in the attempt to evict them or the virtual toleration of the illegal seizure of Greek houses. The removal of the flags led to fresh incidents and in the circumstances troops were ordered to leave them.