Kazantzakis on Greece and Japan 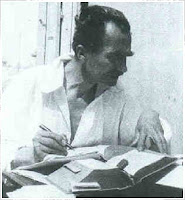 In my recent post, Angelopoulos, Takeshi Kitano, Cacoyiannis, I mention that Greek and Japanese civilisations have some striking similarities. In his book, Travels in China & Japan, recording his impressions of imperial Japan and revolutionary China in the 1930s, Nikos Kazantzakis explains what I mean:

‘There is no country in the world that reminds me more than Japan of what ancient Greece might have been in its most shining moments. As in ancient Greece, so in old Japan and here in whatever of it still lives, even the smallest thing that comes from the hands of man and is used in his everyday life is a work of art, made with love and grace. Everything comes out of agile, dexterous hands, which crave beauty, simplicity and grace – what the Japanese call in one word: shibui (“tastefully bare”).

‘Beauty in everyday life. And many other similarities: both peoples had given to their religion a cheerful aspect and had placed God and man in goodhearted contact. They both had the same simplicity and grace in dress, food and abode. They had similar celebrations devoted to the worship of nature, the anthesteria and sakura; and also from the same root (the dance) they produced the same sacred fruit, the tragedy. Both peoples had tried to give to physical exercises an intellectual aim…

‘The ancient Greeks received the first elements of their civilisation from the Orient and from Egypt, but they succeeded in transforming them and in freeing the sacred silhouette of man from monstrous gods by giving human nobility to the monsters of mythology, theology and fear. In exactly the same way, the Japanese took their religion from India and the first elements of their civilisation from China and Korea, but they, also, succeeded in humanising the physical and the monstrous and in creating an original civilisation – religion, art, action – adapted to the stature of man.’
Posted by John K. at Thursday, December 07, 2017